What is Flea's Net Worth?

Flea is an Australian-born American rock musician who has a net worth of $160 million. Flea was born Michael Peter Balzary in Melbourne, Australia on October 16, 1962. He's best known for his work as bassist for American rock band Red Hot Chili Peppers. He was given the nickname "Flea" as a teenager for his inability to sit still.

His family moved to New York City at the age of five for his father Mick's career. His parents divorced in 1971 and his father returned to Australia. Flea and his sister Karyn stayed with their mother, Patricia, who quickly got remarried to a jazz musician. The family then moved to Los Angeles, where a young Flea would often sit in on jam sessions with his stepfather and other musicians. It was, however, a very violent home, and he reports being terrified of his alcoholic stepfather at times. He started using marijuana to cope with the violence at age 13. His love of music began to become apparent, and he became enthralled by jazz musicians such as Miles Davis and Dizzy Gillespie. He began learning the trumpet, eventually playing with the Los Angeles Junior Philharmonic Orchestra. It was during his time at Fairfax High School that he met future bandmate Anthony Kiedis, who introduced him to the punk rock music scene.

Flea learned to play bass while still in high school, and in 1983 became bassist in a band formed by Kiedis and high school friends Hillel Slovak and Jack Irons. The band was originally known as Tony Flow and the Miraculously Majestic Masters of Mayhem. After they became popular for their raucous live performances, the band's name was changed to Red Hot Chili Peppers. Their first album of the same name was released in 1984 to mostly poor reviews. It was with the release of their second album "Freaky Styley" that the band began to gain wider acclaim. Released a year after their debut, the album went on to sell 175,000 copies. The band exploded in popularity in the early 1990s with a string of popular MTV music videos and successful world tours. By this time, Flea had also taken on the role of lyricist, regularly contributing songs to the group's albums. In 2008, the band announced a brief hiatus, and Flea enrolled to take music classes at the University of Southern California. To date, the RHCP has sold more than 80 million albums worldwide, their most commercially successful album being 1999's "Californication," which sold 15 million copies.

Flea has also had a minor acting career, acting in over 20 movies and television shows. He made a memorable appearance as Needles in the first and second Back to the Future movies, had roles in Big Lebowski and Fear and Loathing in Las Vegas, and acted in 2017's critically acclaimed Baby Driver.

Flea's influences have shifted over the years. His early influence was and continues to be jazz, though along the way he developed a passion for funk and punk rock. He's employed a wide variety of playing techniques throughout his career. He initially gained notoriety for his funk-inspired slap bass, and transitioned into more traditional playing methods on 1991's "Blood Sugar Sex Magik". The albums "Californication" and "By the Way" (released in 1999 and 2002 respectively) led him to explore how to incorporate synthesizers into his bass playing. These albums also drew inspiration from gothic rock bands like the Cure and Joy Division. Flea has employed an array of various guitars throughout his career, including his own brand, Fleabass. His main stage bass over the years has been a Custom Shop Fender Jazz Bass.

In 2009, Rolling Stone nominated Flea as the second-best bass player of all time. Flea also came in second in an online poll conducted by Contact Music in April 2011 of the best bass guitarist in rock music. Flea and the other band members were inducted into the Rock and Roll Hall of Fame in 2012. The RHCP have received 16 Grammy nominations and 6 Grammy awards. 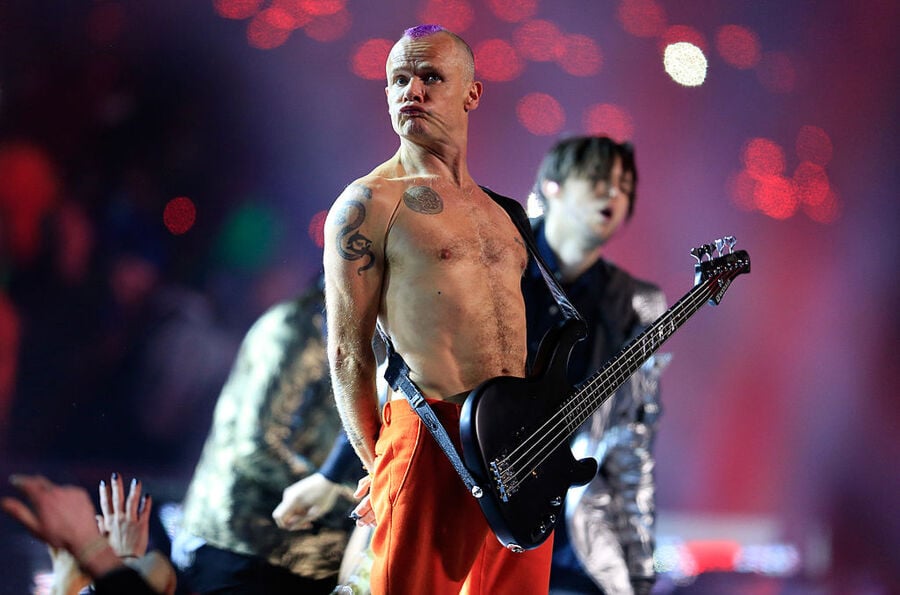 From 1988 to 1990, Flea was married to Loesha Zeviar. They had a child in 1988, a daughter named Clara Balzary.  In 2005, Flea had a son with ex-fiance Frankie Rayder, Sunny Bebop Balzary. On October 22, 2019, Flea married designer Melody Ehsani just one month after the couple announced their engagement.

In 1990, Flea and the Chili Peppers appeared in PSA ads for non-profit Rock the Vote, which was created to encourage 18- to 24-year-olds in the United States to vote in the upcoming presidential election. He has campaigned for Barack Obama and Bernie Sanders on their bids for election. Flea is very outspoken about the prevention of gun violence as well as climate change, often taking to Twitter to express his outrage. In February 2018, Flea released a "Time" magazine op-ed about the Opioid crisis in America, and for the first time detailed his own personal battle with drug addiction.

In 2001, Flea co-founded the Silverlake Conservatory of Music, a non-profit music education organization for underprivileged children. He feels strongly that many children in a public school setting are severely lacking a comprehensive musical education and exposure to the arts, due to many schools being forced to cut their budget for these programs.

After over four years of working on a memoir, he released "Acid for the Children" in November 2019, which details his life before the Red Hot Chili Peppers.

Flea is an avid Lakers fan, and can often be spotted at games with his bandmates. He's also a fan of English football team Sheffield United.

Flea owns and has owned a number of properties in Los Angeles over the years. For example, in 2008 he bought a home in Los Feliz neighborhood for $3.9 million. He sold this house in 2010 for $6 million to Jack Black. In July 2011 Flea bought another Los Feliz home for $4.45. He sold this home in 2014 for $6 million. That same year he yet another home in Los Feliz, this one for $2.5 million, which he listed for sale in mid-2018 for a shade under $3 million.

He also owns a $4.25 million home in the mountains north of Los Angeles in a town called La Crescenta.

In November 2020 Flea paid $7.5 million for a home in Malibu's most-desirable neighborhood, the Malibu Colony. Believe it or not, for $7.5 million, the home is not even 2,000 square-feet and it's not actually on the oceanfront side of the street:

In December 2021 Flea paid $14 million for mansion high up in the Hollywood Hills. The property spans 1.4 acres and features a 7,300 square-foot main home that has 7 bedrooms and 8 bathrooms. 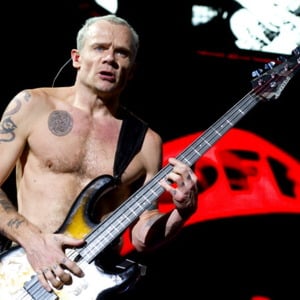