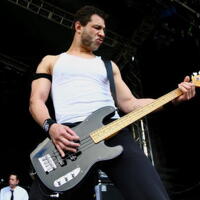 Evil Jared Hasselhoff net worth: Evil Jared Hasselhoff is an American musician, songwriter, and actor who has a net worth of $3 million. Evil Jared Hasselhoff was born in Philadelphia, Pennsylvania in August 1971. He is best known for being the bassist for the band Bloodhound Gang. As an actor Hasselhoff has starred in the movies White Men Can't Rap, A Halfway House Christmas, and Minghags. He also appeared in episodes of the TV series Verbotene Liebe in 2008. Hasselhoff has appeared in episodes of the TV series Viva la Bam and Circus Halligalli. Bloodhound Gang formed in 1991 and has sold over six million albums. Their debut studio album Use Your Fingers was released in 1995 and their second album Once Fierce Beer Coaster was released in 1996. Their 1999 album Hooray for Boobies was certified Platinum and reached #1 in Austria and Germany and #14 in the United States. The band's latest album Hefty Fine was released in 2005. Their most popular single is "The Bad Touch" which reached #1 in Germany and Sweden and the Top 5 in Australia, Austria, New Zealand, Switzerland, and the UK. Other popular singles for Bloodhound Gang include "Fire Water Burn" and "Along Comes Mary". Hasselhoff is the CEO of the German beverage distributor Rock-Drinks.de. He was banned from entering Ukraine for five years in 2013 when he urinated on the Ukrainian flag at a concert in Kiev.