At age four she was inspired after seeing classical cellist Yo Yo Ma perform. Within a year, she reportedly taught herself to play the violin well enough to land a spot in a community orchestra open to both children and adults. At the age of 15, she discovered the bass and before long was playing various styles of music on the local club circuit. At 16, Spalding left high school and enrolled in the music program at Portland State University, but Berklee College of Music was where doors started opening. At Berklee she earned a B.M. and signed on as an instructor at the age of 20-making her the youngest faculty member in the history of Berklee. Spalding was the 2005 recipient of the prestigious Boston Jazz Society scholarship for outstanding musicianship. The Berklee years also created networking opportunities with several notable artists, including pianist Michel Camilo, vibraphonist Dave Samuels, bassist Stanley Clarke, guitarist Pat Metheny, singer Patti Austin and saxophonists Donald Harrison and Joe Lovano. Her album 'Esperanza' showcased Spalding singing in three different languages (English, Spanish and Portuguese). The album reached No. 2 on the Billboard Top Contemporary Jazz Albums chart, No. 3 on the Jazz Albums chart and No. 40 on the Top Independent Albums chart. At the 2009 Nobel Peace Prize ceremonies, Spalding performed at Oslo City Hall in honor of the 2009 Laureate President Barack Obama and again at the Nobel Peace Prize Concert the following day. 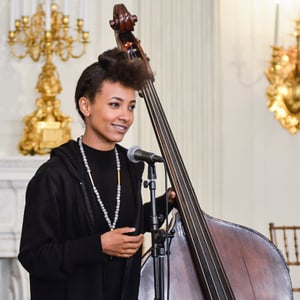