Eddie Vedder net worth: Eddie Vedder is an American rock singer and musician who has a net worth of $100 million. Eddie Vedder is best known as the lead singer for the rock band Pearl Jam. He also plays guitar for Pearl Jam and is the band's primary lyricist. Vedder has been ranked at number seven on Rolling Stone's list of Best Lead Singers of All Time.

Early Life: Eddie Vedder was born Edward Louis Severson III on December 23, 1964, in the Chicago suburb of Evanston, Illinois. His mother Karen Vedder and father Louis Severson, Jr. divorced in 1965. His mother remarried quickly to a man named Peter Mueller. Vedder was raised believing Mueller was his biological father. Vedder moved to San Diego in the mid-1970s with his parents and siblings. On his 12th birthday, he got his first guitar from his mom for his birthday. As a teen, Vedder turned to surfing and music for comfort. When his mom and stepfather divorced, Eddie was in his late teens and he decided to stay in San Diego with his father while his mother and siblings moved back to Chicago. During his senior year at San Dieguito High School, Vedder moved out to live on his own in an apartment, supporting himself with a nightly job at a drug store in Encinitas, California. After the divorce, Vedder found out that Mueller wasn't his biological father. His biological father, Louis Severson, Jr., had died by then. Vedder dropped out of high school, moved back to Chicago, and changed his last name to Vedder, his mom's maiden name. Eddie got his GED in the early '80s.

In 1984, he and his girlfriend Beth Liebling and friend Frank moved back to San Diego. During this time, Vedder was part of several San Diego area bands, including Indian Style, a band that included Brad Wilk. Wilk is best known as the drummer for Rage Against the Machine, Audioslave, and Prophets of Rage. Vedder met Jack Irons, the former Red Hot Chili Peppers drummer, when he was in the band Bad Radio. Irons gave Vedder a demo tape by a Seattle-based band called Temple of the Dog. Vedder sent lyrics to go with the music he heard on the demo and sent them to Seattle.

Career: Mother Love Bone was a Seattle-area band made up of Jeff Ament, Stone Gossard, Andrew Wood, and others. Wood died of a heroin overdose at 24. Ament, Gossard, Chris Cornell, Mike McCready, and Matt Cameron formed a one-off tribute to Wood project called Temple of the Dog. Ament and Gossard received Vedder's demo tape and invited him to audition for Temple of the Dog in Seattle.  Temple of the Dog's one and only album was released in April 1991. "Hunger Strike," a duet between Vedder and Cornell, became the band's breakout hit.

People generally think of Pearl Jam as Eddie Vedder's band. But the band was formed by Ament, Gossard, and McCready in 1990. The trio then hired Vedder and a series of drummers. Pearl Jam was originally called Mookie Blaylock after the NBA player. When the band signed with Epic Records in 1991, they had to change their name. Pearl Jam's debut album, "Ten," is one of the best-selling alternative rock albums of the 1990s. The band was thrust into the limelight and considered to be one of the founders of the grunge era of Seattle-based rock.

Pearl Jam's 2020 Tour in support of "Gigaton" was postponed due to the coronavirus pandemic.

In June 2020, Vedder and Pearl Jam took part in the Livestream concert "All In WA: A Concert for COVID-19 Relief." He and the other members of Pearl Jam performed a socially distanced version of "Gigaton's" first single, "Dance of the Clairvoyants." Each member of Pearl Jam performed his role in isolation. Vedder twirled around a room with psychedelic lights, odd props, and his wife and daughters. Ament played his parts from his home studio in Montana, and McCready painted himself with glow-in-the-dark paint before he took to the Livestream. The Livestream also featured performances from other Seattle-based musicians including Brandi Carlile, Ben Gibbard from Death Cab for Cutie, and Macklemore. 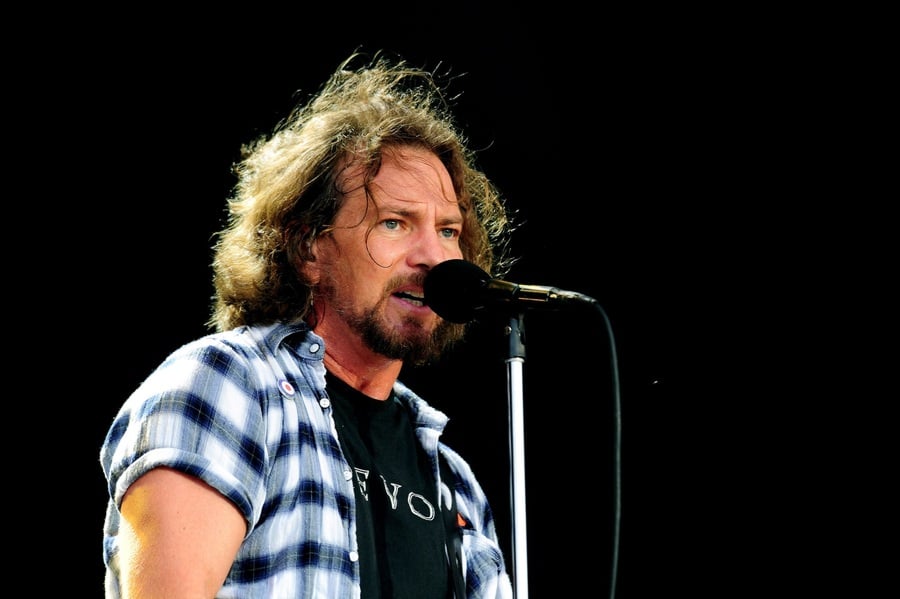 On September 18, 2010, Vedder married his longtime girlfriend Jill McCormick. Vedder and McCormick have two daughters, Olivia and Harper. In June 2020, McCormick posted a tribute to Eddie and their 20-year relationship on her Instagram account. She captioned a throwback photo of the couple, "Happy Anniversary to my best friend, my soulmate, and the love of my life – 20 years! Things haven't always been easy but they sure have been fun and filled with love and respect for each other. So grateful for you and the life we've built together… We have a choice every single day… And every day… I choose you."

Vedder identifies as an atheist and frequently writes and sings lyrics that question religious authority.

Vedder was a close friend of late Soundgarden and Audioslave frontman, Chris Cornell. When Vedder moved to Seattle in 1990, Cornell was one of the first people Vedder met.

Vedder is a fan of the Chicago Bears, Bulls, and Cubs. In fact, he's a long-time, die-hard Cubs fan. Vedder went to many of the team's 2016 playoff games. He was there for the Cubs' Game Seven victory in the 2016 World Series.

Vedder sang the national anthem before the third game of the 1998 NBA Finals in Chicago.

Vedder has sung "Take Me Out to the Ball Game" at six Cubs games, including Game 5 of the 2016 World Series.

A number of Vedder's songs reference Chicago sports teams and athletes. "Black, Red, and Yellow," for instance, is about the Phil Jackson/Michael Jordan/Dennis Rodman era of the Chicago Bulls.

Pearl Jam was scheduled to perform at Lollapalooza in Chicago in 2007. A few days before that performance, Vedder was asked to throw out the first pitch of a Cubs game at Wrigley Field.

Ernie Banks, the legendary Cubs shortstop and first baseman, asked Vedder to write a song paying tribute to the Cubs. Vedder wrote, "All the Way," which no Cubs fan can listen to post-World Series win without tearing up. The day after the Cubs' 2016 World Series win after 108 years, the Cubs' official Twitter account posted a video montage of Vedder's song in tribute to their die-hard, loyal fan base. 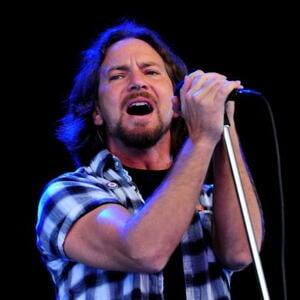