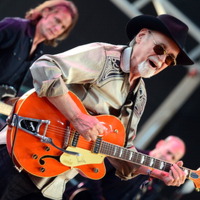 Duane Eddy Net Worth: Duane Eddy is an American musician who has a net worth of $5 million. Born in 1938 in Corning, New York, Duane Eddy grew up in Arizona and started playing guitar when he was 16 years old. Eddy soon formed his first music group, the Jimmy and Duane duo. They played on local radio before meeting a DJ who produced their debut single, "Soda Fountain Girl". Eddy's follow-up instrumental, "Movin' n' Groovin'," climbed to number 72 on the U.S. charts in the late '50s. His next single, "Rebel Rouser", broke into the top ten, peaking at number six. That set off a string of success that lasted into the next decade. 1960's "Because They're Young" was the best performing single of Eddy's career, which cracked the top five in both the United States and the United Kingdom. He has released more than two dozen albums between 1958 and 2013. Eddy is a 1986 Grammy Award winner for Best Rock Instrumental for the track "Peter Gunn". In 1994, he was inducted in the Rock and Roll Hall of Fame, and more than a decade later, became a member of the Musicians Hall of Fame and Museum. He has sold more than 12 million copies of his records worldwide. Eddy also built a film career during the '60s, with appearances in a handful of movies, including 1960's "Because They're Young", 1961's "A Thunder of Drums", 1962's "The Wild Westerners" and 1968's "The Savage Seven".