Doug Aldrich net worth: Doug Aldrich is an American musician, songwriter, and singer who has a net worth of $6 million. Doug Aldrich was born in Raleigh, North Carolina in February 1964. He is a hard rock guitarist who has played with several bands including Whitesnake, Hurricane, Dio, House of Lords, Lion, Revolution Saints, and Bad Moon Rising.

Aldrich also founded the band Burning Rain. He has released solo albums and replaced Richard Fortus as the guitarist of the band The Dead Daisies. Doug Aldrich began playing guitar at 11 and in 2014 he became part of the show Raiding the Rock vault at the New Tropicana Hotel and Casino in Las Vegas. He was first featured on Lion albums in the 1980s and has also played on albums by Hurricane, Bad Moon Rising, Burning Rain, Dio, Whitesnake, Revolution Saints, and The Dead Daisies and has collaborated with Brian McKnight, Lady Gaga, and more. 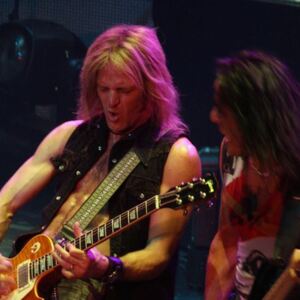