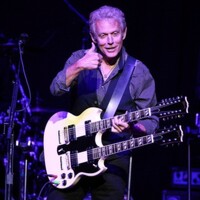 Don Felder net worth: Don Felder is an American musician and songwriter who has a net worth of $60 million dollars. He is best known for being the lead guitarist of the American rock band The Eagles.

Early Life: Born in Gainesville, Florida, on September 21, 1947, Don Felder began playing guitar when he was in elementary school, and formed his first band when he was in high school, The Continentals. Felder was raised in a Southern Baptist family and was first attracted to music after watching Elvis Presley live on "The Ed Sullivan Show." The family couldn't afford music lessons so Felder taught himself to play guitar by ear, listening to tape recordings that he played back at half speed. Throughout high school, Felder worked at a music school started by a Berklee graduate who taught music theory and some notes to Felder while he worked there. Felder attended Gainesville High School and after he graduated he taught guitar lessons at a local music shop for about 18 months. One of his students during this period was a young Tom Petty.

Career: He played with future Eagles bandmate, Bernie Leadon, in a band in Florida, and then had his first taste of musical success, performing with the group the Maundy Quintet. The group recorded and released a 45 rpm single on the Tampa-based Paris Tower label in 1967, which received airplay in north-central Florida. The Maundy Quintet broke up in the late '60s.

Felder soon relocated to New York, where he performed and recorded with the improvisational rock group, Flow, which released a self-titled improv rock fusion album in 1970, and then moved to Boston to work at a recording studio. In 1973, Felder relocated to Los Angeles and was hired as a guitar player for a tour by David Blue. He helped Blue put together a tour during which they opened for Crosby and Nash shows in November 1973, and for Neil Young at the opening of the Roxy Theatre. During this time, he would also jam from time to time with the Eagles in their rehearsal space.

He met the members of The Eagles in the early 70s through Bernie Leadon, and in 1974, he was invited to perform on one of their tracks, slide guitar on "Good Day in Hell." Don was eventually invited to join the group. At the same time, the band was beginning to distance themselves from their initial country rock style and moving in the direction of full-fledged rock music. The band's fourth album, "One of These Nights," features Felder singing vocals on the song "Visions," the only song that had him singing the lead. The song was co-written by Felder and Don Henley and Felder arranged the title track's distinctive guitar solo and bass line. In 1975, founding member Bernie Leadon departed the Eagles and Joe Walsh joined the band. Eventually, Felder and Walsh together with their dual guitar leads would become one of rock music's most memorable partnerships on stage. 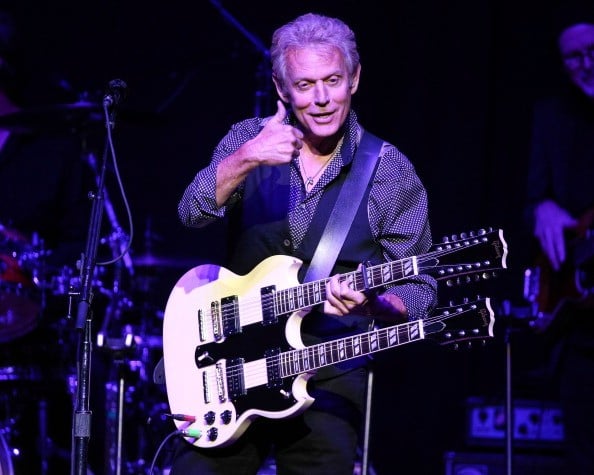 The first album released by the Eagles after the shakeup in members was "Hotel California," which became a major international hit and arguably their most famous work. Felder wrote the group's most successful song, the title track off the album, "Hotel California". After the massive success and the pressure that followed to repeat their success, the Eagles found themselves under strain and tensions that were made worse by alcohol, cocaine, and other heavy drug use. Their bassist Randy Meisner left the band after the accompanying "Hotel California" tour due to exhaustion. The Eagles' fighting intensified during the recording of their next album "The Long Run," which took the band 18 months to complete. Things hit a breaking point for the band on July 31, 1980, at a rally concert in Long Beach, California for Senator Alan Cranston, known to the band's fans as "Long Night at Wrong Beach." Fighting and threats escalated onstage until Felder smashed Frey's guitar in an angry rage. The Eagles disbanded shortly after.

After they broke up, Felder took time to focus on his family but managed to launch a moderately successful solo career as well. He first worked on the Bee Gees' 1981 album "Living Eyes" as a session guitarist. Felder then made session appearances on albums by artists like Diana Ross, Barbara Streisand, Stevie Nicks, and Andy Gibb.

In 1983, Felder released his first solo album, "Airborne." The single from the album "Never Surrender," which he co-wrote with Kenny Loggins, was a minor hit, appearing on the soundtrack to the popular teen comedy "Fast Times at Ridgemont High." Don Henley offered, in 1985, $5,000 a week to go on tour with him but Felder turned it down, dissatisfied with the pay and also having grown tired of tour life. He has since released two more solo albums, 2012's "Road to Forever" and 2019's "American Rock and Roll." The Eagles did a History of the Eagles Tour in 2013-2015 that coincided with a two-part documentary, but Felder did not participate in the tour. In 2017, Felder toured with REO Speedwagon and Styx across America.

Personal Life: Felder also has a Kardashian connection through his ex-wife Susan. Don and Susan divorced in 2000 after 29 years of marriage. They had four children together. Their daughter Leah Felder is married to Brandon Jenner. Brandon is the son of Caitlyn Jenner and actress Linda Thompson. Brandon's step-mother is Kris Kardashian.