Don Barnes net worth: Don Barnes is an American rock vocalist and guitarist who has a net worth of $10 million dollars. Born in the early 50s, Don Barnes became known to the public after co-founding the band .38 Special with fellow musician Donnie van Zant. The two grew musicians grew up together in Jacksonville, Florida, and formed the group in 1974.

Their southern rock sound, which they combined with a more "arena-rock" style, proved to be quite popular throughout the 80s, and they released such hit tracks as "Hold on Loosely", "Caught Up in You", "If I'd Been the One", and "Back Where You Belong". Don Barnes performed the lead vocals on many of the hit tracks, including the aforementioned. He decided to leave the band in 1987 to focus on a solo career, and recorded his first solo album in 1989. However, the label to which he was signed folded before his debut was released. He subsequently returned to perform with .38 Special in the mid-90s. He has remained with the band, which continues to tour extensively, ever since. 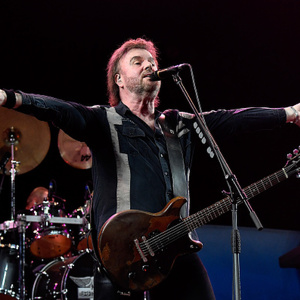