How much is Dickey Betts Worth?

Dickey Betts Net Worth: Dickey Betts is an American guitarist, singer, songwriter, and composer who has a net worth of $40 million dollars. Dickey Betts is best known as a founding member of The Allman Brothers Band. Dickey Betts was born Forrest Richard Betts on December 12, 1943 in West Palm Beach, Florida. Betts grew up in a musical family listening to bluegrass, country and Western Swing music. He started playing ukulele at five and, as his hands got bigger, moved on to mandolin, banjo and guitar. In 1969, Duane Allman had parlayed success as a session player into a contract with former Otis Redding manager Phil Walden. Walden planned to back a power trio featuring Allman, who needed to put together the rest of the band. When Allman organized jam sessions as part of his effort to recruit Oakley for the group, Betts sat in and became a co-founder and key contributor to the Allman Brothers Band. After the death of Duane Allman in late 1971, Betts became the band's sole guitarist and also took on a greater singing and leadership role. Betts, over the course of one night's traveling, practiced slide guitar intensively in order to cover the majority of Duane's parts. He went on to write such Southern Rock classics as "Jessica" and the Allmans' biggest commercial hit, "Ramblin' Man". 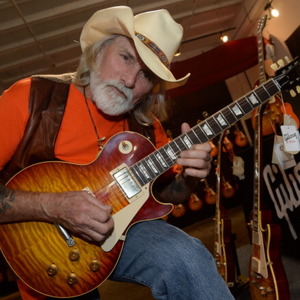