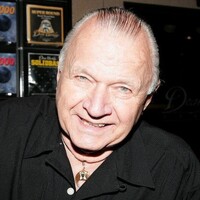 Dick Dale Net Worth: Dick Dale was an American musician who had a net worth of $200 thousand dollars at the time of his death in 2019. Known as The King of the Surf Guitar, Dick Dale was born in Boston, Massachusetts in 1973 as Richard Anthony Monsour. Dale began playing instruments before his tenth birthday. He learned to surf several years later and soon became heavily interested in Arabic music. In 1961, Dale started to play at Balboa's Rendezvous Ballroom. Those performances are now credited with beginning his surf music genre. His 1961 song, "Let's Go Trippin'", is considered the first surf rock song in history. A year later, Dale released his debut album, "Surfer's Choice", which led to appearances on "The Ed Sullivan Show". Though surf rock lost popularity to the rise of the British Invasion, Dale continued to perform until he suffered a bout with cancer. Between 1962 and 2001, Dale has released a dozen albums, including "King of the Surf Guitar", "Checkered Flag", "Summer Surf", and "Tribal Thunder". His music has been used by professional sports teams, including the Colorado Avalanche, and appears in "Pump It" by the Black Eyed Peas. The Michael Jordan film "Space Jam" also uses a snippet from Dale's song "Misirlou". Dale was inducted into the Surfing Walk of Fame in 2011 and the Nashville Musicians Hall of Fame two years earlier.

Decline and death: Later in life, on-going medical issues and bills somewhat forced Dick to perform as much as possible. In 2015 he told Rolling Stone that his only income came from touring and that he had thousands of dollars per month in medical bills. Unfortunately Dick Dale died on March 16, 2019 at the age of 81.