Derek Jones net worth: Derek Jones was an American musician and singer who has a net worth of $3 million. He is best known for being a member of the band Falling in Reverse.

Derek Jones was born in Fountain Valley, California in June 1984 and passed away in April 2020. He played the guitar and bass guitar and also sings. Jones was the guitarist of the band A Smile From the Trenches and played on the band's EP A Smile From the Trenches in 2007 and album Leave the Gambling for Vegas in 2009. He served as the rhythm and lead guitarist as well as co-lead vocalist for the post-hardcore band Falling in Reverse. The band formed in 2008 and released their debut studio album The Drug in Me Is You in 2011 which reached #1 on the UK Rock chart, #2 on the US Hard Rock chart, and #3 on the US Alternative and US Rock charts. They released the albums Fashionably Late in 2013, Just Like You in 2015, and Coming Home in 2017, which all reached #2 on the US Hard Rock chart. Their single "Popular Monster" reached #1 on the US Mainstream Rock chart. Derek Jones passed away on April 21, 2020 at 35 years old with the cause unknown. 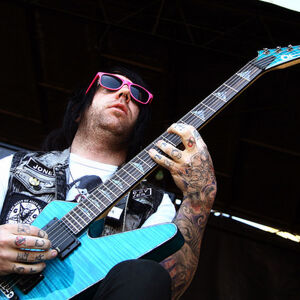