How much is Dee Snider Worth?

Dee Snider net worth: Dee Snider is an American singer-songwriter, actor, radio personality, and screenwriter who has a net worth of $10 million. Dee Snider has earned his net worth through his many talents in the music world, TV, radio, films and books. He was born Daniel Snider in Astoria, New York in March 1955. Snider sang in church choir, school choruses, and the Baldwin High School Concert Choir as a child. He was selected to the All-State Chorus. He joined the rock band Twisted Sister in 1976 and took on the band's songwriting duties. In 1982 the band's first album, Under the Blade, was released. Their most successful album Stay Hungry was released in 1984 and contained the hits "We're Not Gonna Take It" and "I Wanna Rock". Snider is known for his signature look of long blond hair, eye makeup, and red lipstick. Snider hosted the first episode of MTV's Headbanger's Ball in 1985. Dee testified against censorship in a 1985 Senate hearing, which eventually brought about the Parental Advisory label on music. Snider went on to play with bands Desperado, Widowmaker, and Bent Brother. He started hosting a radio show called House of Hair in 1997. In 2012 Dee Snider was one of 18 contestants on Donald Trump's Celebrity Apprentice. He is best friends with Alice Cooper and was recognized by Hit Parader as the #83 Metal Vocalist of All Time. 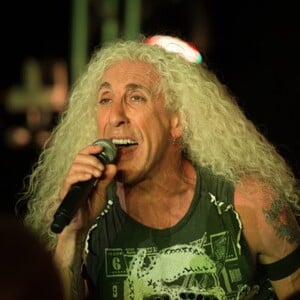