David Garrett net worth: David Garrett is a German musician who has a net worth of $12 million. He is a record-breaking pop culture star and cross over violinist who has been creating studio albums since 1995.

He was born on September 4, 1981 in Aachen, Germany to an American prima ballerina and a German antique dealer. When he was four years old, his father bought a violin for his older brother, which spurred Garret's interest, and he quickly learned to play himself. By the age of seven, he studied violin at the Lübeck Conservatoire, and received his first Stradivarius at the age of 11, courtesy of German president Richard von Weizsäcker, after having performed for him. At the age of 13, Garrett recorded two CDs, appeared on German and Dutch television, and gave a concert in the residence of the Federal Republic of Germany President, the Villa Hammerschmidt, at Dr. von Weizsäcker's personal invitation. He attended the Juilliard School and in 2003, won the Composition Competition of Juilliard School with a fugue composed in the style of Johan Sebastian Bach; he went on the graduate in 2004. While attending Julliard, Garrett supplemented his income by working as a model. Over the course of his career, he has recorded over 14 albums and has been featured in several compilation albums in addition to selling DVDs of his live performances. He is in the Guinness Book of World Records as the "World's Fastest Violinist" and has received several awards for excellence over the course of his career. Over the years, Garrett has dated several high-profile women, but he has a difficult time staying in a relationship for longer than a few months due to his nearly constant traveling schedule. 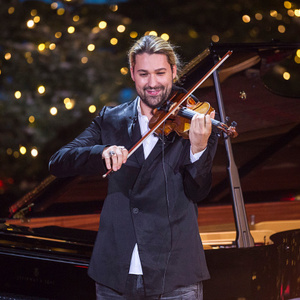