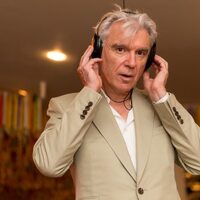 What is David Byrne's Net Worth?

David Byrne is a singer, songwriter, instrumentalist, record producer and filmmaker who has a net worth of $60 million. David Byrne is best known as the lead singer of the rock band Talking Heads. Beyond the band, he has released a number of solo recordings, and has done work in film, photography, literature, and theatre. His musical "American Utopia" opened on Broadway in 2019, and spawned a concert film directed by Spike Lee in 2020.

David Byrne was born on May 14, 1952 in Dumbarton, Scotland as the first of two children of Emma and Tom. When Byrne was two, the family moved to Canada and settled in Hamilton, Ontario. They subsequently moved to the United States, where they made their residence in Arbutus, Maryland when Byrne was around eight. Growing up, Byrne learned how to play the guitar, violin, accordion, and harmonica. His father, who worked as an electronics engineer at Westinghouse Electric Corporation, used his skills to modify a reel-to-reel tape recorder on which Byrne could make multitrack recordings.

While attending Landsdowne High School, Byrne began his music career in a teen band called Revelation. He was subsequently in the music duo Bizadi with Marc Kehoe. For his higher education, Byrne went to the Rhode Island School of Design and the Maryland Institute College of Art. However, he dropped out, and formed a band called the Artistics with his classmate Chris Frantz. After the group disbanded, Byrne moved to New York City, and was shortly after joined by Frantz and his girlfriend Tina Weymouth.

Byrne, Frantz, and Weymouth founded the rock band Talking Heads in 1975. Two years later, they added Jerry Harrison on keyboard, guitar, and backing vocals. The band subsequently released its first album, "Talking Heads: 77," which launched the hit single "Psycho Killer." Over the next three years, Talking Heads released the critically acclaimed Brian Eno-produced albums "More Songs About Buildings and Food," "Fear of Music," and "Remain in Light." Following a hiatus, the band had its commercial breakthrough in 1983 with the top-ten hit song "Burning Down the House," from the album "Speaking in Tongues." The next year saw the release of the hit Talking Heads concert film "Stop Making Sense," directed by Jonathan Demme. The band's success grew even larger in 1985, when it released its bestselling album, "Little Creatures." Talking Heads' final album, "Naked," came out in 1988. After Byrne left, the band performed under the name Shrunken Heads, and released an album as the Heads in 1996. 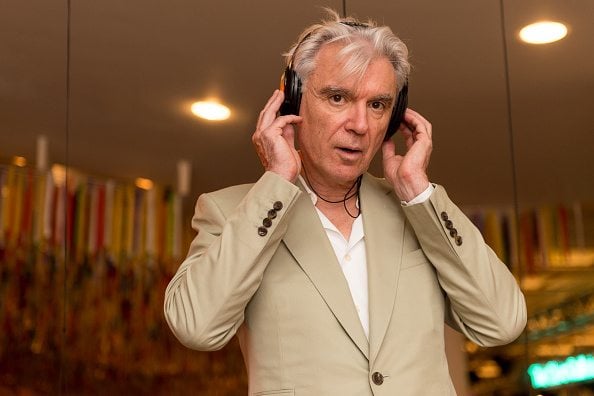 While still with Talking Heads, Byrne did a number of solo and collaborative projects, including the 1981 album "My Life in the Bush of Ghosts," which was recorded with Brian Eno. Later, in 1989, Byrne released his first solo album after leaving Talking Heads, called "Rei Momo." It featured a variety of song styles drawing from Afro-Cuban, Brazilian, and Afro-Hispanic music. Byrne released his next solo album, "Uh-Oh," in 1992. This was followed in 1994 by the self-titled "David Byrne," which spawned the singles "Angels" and "Back in the Box." His subsequent solo albums were "Feelings," "Look into the Eyeball," "Grown Backwards," and "Everything That Happens Will Happen Today," on which he reunited with Brian Eno.

Throughout his career, Byrne has been involved in a wide range of media projects spanning film, television, theatre, photography, and literature. In 1986, he wrote, directed, and starred in the satirical comedy film "True Stories," which also featured music from Talking Heads. The next year, he collaborated with composers Ryuichi Sakamoto and Cong Su on the soundtrack to the epic biographical film "The Last Emperor," which won him an Academy Award for Best Original Score. Byrne has worked on several other soundtracks, including those for the erotic drama film "Young Adam," the television series "Big Love," and the film sequel "Wall Street: Money Never Sleeps." He has also collaborated on songs by numerous artists, including Richard Thompson, Devo, Morcheeba, X-Press 2, Thievery Corporation, N.A.S.A., Arcade Fire, Jherek Bischoff, Anna Calvi, De La Soul, and Latin superstar Selena. Additionally, he has contributed songs to multiple AIDS benefit compilation albums. In 2015, Byrne organized two arena concerts in Brooklyn and Toronto called "Contemporary Color"; the next year, the concerts were made into a documentary film. Byrne has also appeared on television programs over the years, notably in comedian John Mulaney's Netflix comedy special "John Mulaney & the Sack Lunch Bunch."

One of Byrne's greatest multimedia successes has been his "American Utopia" project, which began as an album before becoming an innovative live performance. In 2019, it debuted on Broadway, and in 2020, became a concert film directed by Spike Lee. A picture book was also released as a companion piece to the Broadway production. Among his other media work, Byrne has displayed visual art in contemporary galleries and museums around the world.

In the early 80s, Byrne dated singer, actress, choreographer, and filmmaker Toni Basil, as well as dancer and choreographer Twyla Tharp. Subsequently, while visiting Japan in 1982, he met costume designer Adelle Lutz; the two later married in 1987, and had a daughter named Malu in 1989. After getting divorced from Lutz in 2004, Byrne began a relationship with art curator and gallery sales director Louise Neri. For a while, he also dated artist Cindy Sherman.

Byrne is a dual citizen of the United States and the United Kingdom, and resides in New York City. He suspects he has Asperger syndrome, although he has not been professionally diagnosed.