Dave Stewart net worth: Dave Stewart is an English musician, songwriter, and record producer who has a net worth of $45 million. David Allan Stewart was born in Sunderland, England in September 1952. He is best known as half of the duo the Eurythmics.

As a teenager Stewart got a record deal with Elton John's label as part of the band Longdancer. He met Annie Lennox in 1976 and they started dating. They teamed up with Peet Coombes to form The Tourists. That band and the Stewart/Lennox couple split up in 1980. Stewart and then Lennox went on to form the Eurythmics. The group released nine studio albums and sold more than 80 million records worldwide. They won a Grammy Award, MTV Video Music Award, and Brit Award. In 2005 they were inducted into the UK Music Hall of Fame. They split in 1990 but later reunited in 1999.

After the Eurythmics Stewart moved to France. He released two albums with new band The Spiritual Cowboys. He had a cameo in the 1995 movie Hackers. He joined Mick Jagger's supergroup Super Heavy in 2011. Dave co-produced or produced all of the Eurythmics' albums as well as an album for Tom Petty and the Heartbreakers. He has been involved with soundtracks and moved to Hollywood in 2004. He married Anoushka Fisz in 2001. He was formerly married to Siobhan Fahey of Bananarama and has four children. 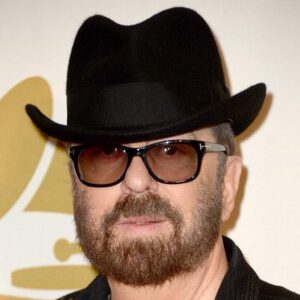