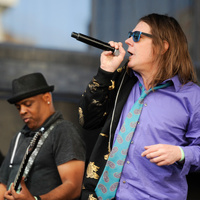 Dave Pirner net worth: Dave Pirner is an American singer, musician, songwriter, and producer who has a net worth of $8 million. Dave Pirner was born in Green Bay, Wisconsin in April 1964. He is best known for being the front man of the rock band Soul Asylum. He taught himself how to play drums and played with a punk band in Minneapolis. He switched to vocals and rhythm guitar and also played trumpet, percussion, keyboard, harmonica, and saxophone. Soul Asylum formed in 1981 and released their debut studio album Say What You Will… Everything Can Happen in 1984. They went on to release the albums Made to Be Broken in 1986, While You Were Out in 1986, Hang Time in 1988, and And the Horse They Rode In On in 1990. Soul Asylum achieved success with their 1992 album Grave Dancers Union which reached #11 on the Billboard 200 chart and was popular in many countries. Their 1995 album Let Your Dim Light Shine was also a big success and reached #6 on the Billboard 200. Soul Asylum also released the albums Candy from a Stranger in 1998, The Silver Lining in 2006, Delayed Reaction in 2012, and Change of Fortune in 2016. Their hit singles include "Somebody to Shove", "Black Gold", "Runaway Train", and "Misery". Dave Pirner released his debut solo album Faces & Names in 2002.