Dave Brubeck Net Worth: Dave Brubeck was an American musician and composer who had a net worth of $15 million dollars. David Warren Brubeck was born in Concord, California in December 1920 and passed away in December 2012. Dave took piano lessons from his mother. He was almost expelled when his professor found out he could not read music.

The school agreed to let him graduate if he promised never to teach piano. He was drafted into the U.S. Army but was spared from combat due to his musical ability. As a jazz pianist Brubeck is credited with being one of the fathers of cool jazz. He wrote many jazz standards including "The Duke" and "In Your Own Sweet Way". His music is known for its unusual time signatures and superimposing contrasting meters, rhythms, and tonalities. His best known piece of music was "Take Five" with the Dave Brubeck Quartet. Brubeck wrote soundtracks for This Is America, Charlie Brown and Mr. Broadway. Over the years Brubeck has had more than 120 albums released. The 1959 Dave Brubeck Quartet album Time out was the first jazz album that sold over a million copies. Brubeck has been recognized with a Grammy Lifetime Achievement Award, BBC Jazz Lifetime Achievement Award, Kennedy Center Honor, and he was inducted into the California Hall of Fame. Dave Brubeck passed away on December 5, 2012, one day before his 92nd birthday from heart failure. 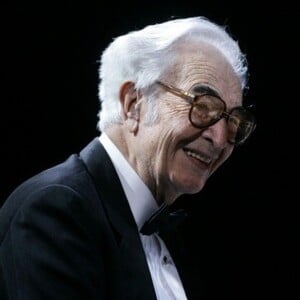