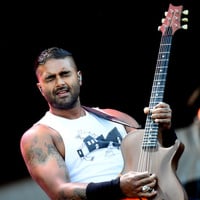 Dave Baksh net worth: Dave Baksh is a Canadian musician, singer, and producer who has a net worth of $8 million. Dave Baksh was born in Ajax, Ontario, Canada in July 1980. He is best known for being one of the lead guitarists of the punk rock band Sum 41. Baksh was a member of the band from 1997 to 2006 and then rejoined in 2015. The band released their debut studio album All Killer No Filler in 2001 and it reached 3x Platinum in Canada where it reached #9 as well as #7 in the UK. Sum 41 had success with their albums Does This Look Infected? In 2002 and Chuck in 2004. Their 2007 album Underclass Hero reached #1 in Canada and #2 in Japan. The band has also released the albums Screaming Bloody Murder in 2011 and 13 Voices in 2016. Their single "Fat Lip" reached #1 on the US Alternative charts and Sum 41 has also had success with the singles "In Too Deep" and "Still Waiting" among others. He started his own heavy metal and reggae project called Brown Brigade and plays guitar for the bands Organ Thieves and Black Cat Attack.