What is Darius Rucker's Net Worth?

Darius Rucker is an American musician who has a net worth of $12 million. Although Rucker first earned fame as the lead guitarist and singer of the rock band Hootie & the Blowfish, he later became a successful solo artist. As a result of his solo releases, Darius won the New Artist Award from the Country Music Association. Outside of music, Darius Rucker is known for his philanthropic work and activism.

Darius Carlos Rucker was born on May 13th of 1966 in Charleston, South Carolina. Raised alongside 5 siblings by a single mother who worked as a nurse, Rucker attended church regularly. His father was not in the picture, but he was in a Gospel band during Rucker's upbringing. Darius' family was poor, and they attended church regularly. Despite his financial struggles during childhood, Rucker looks back upon these early years with fond memories. Singing professionally was Darius' dream from a very early age.


While attending the University of South Carolina, Rucker met Mark Bryan, Jim Sonefeld, and Dean Felber. These four musicians would later go on to form the rock band Hootie & the Blowfish. While they started off performing R.E.M. covers at local venues, they later took themselves more seriously and started releasing albums in the 90s.

In 1994, the group released the album "Cracked Rear View," which propelled them to considerable fame. Critics singled out Rucker for praise, and his signature baritone voice became one of the key elements of the band. The group relocated to Columbia, and Rucker started to sing national anthems at sporting events. Darius also started to collaborate with other high-profile artists.

After their first album, Hootie & the Blowfish followed up with albums such as "Fairweather Johnson," "Musical Chairs," "Scattered, Smothered, & Covered," "Hootie & the Blowfish," and "Looking for Lucky." Many of these albums contained top 40 hits, and Rucker wrote a number of the tracks himself. Despite a ten-year hiatus, the group reunited in 2019 and started touring with the Barenaked Ladies. They followed up that year with a new album called "Imperfect Circle." 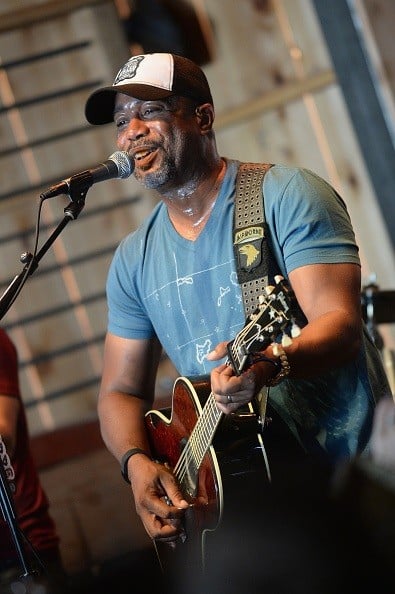 Rucker ventured into solo work quite early in his career, starting with the 2001 R&B album "The Return of Mongo Slade," which was later renamed "Back to Then" and released by Hidden Beach Recordings in 2002. The album featured collaborations with Jill Scott, and one track was featured on the soundtrack of the film "Shallow Hal."

Despite his R&B release, Darius Rucker became fully focused on Country music for the rest of his solo career. In 2008, he signed a deal with Capitol Records Nashville and released his first solo Country single, "Don't Think I Don't Think About It." This was part of his second solo album and his first Country effort, "Learn to Live." The album eventually achieved platinum certification and contained many hits.

After solidifying his presence in the Country music scene and winning the New Artist Award, Rucker followed up with the album "Charleston, SC 1966." The single "Come Back Song" reached the number one spot on the Country charts, as did the single "This." His second Country album also featured a duet with Brad Paisley entitled "I Don't Care."

In 2015, Rucker followed up with the album "Southern Style," which contained hits like "Homegrown Honey." After collaborating with Sister Hazel, Darius began work on his fifth country album. After touring for a considerable period, Rucker released "When Was the Last Time" in 2017.

In 2016, Rucker became a partner in MCG Sports, an agency that represents high-profile golfers such as Steve Stricker and Kenny Perry. The organization also represents athletes and coaches from other sports. Darius has stated that he believes his experience with the entertainment industry will give him an advantage in the sports agency business.

Darius Rucker's first child came in 1995, and the mother was his girlfriend at the time, Elizabeth Ann Phillips. After marrying his wife Beth, Rucker welcomed his second child into the world. They subsequently had another child together before becoming divorced in 2020.

Darius Rucker is also a close friend of Tiger Woods', having met the golfer when he was just 18 years old. Rucker performed at Woods' wedding.

In 2015, it was announced that Darius Rucker had presented the keys to a new home for a veteran in South Carolina. This was part of a much wider effort on Rucker's part to give away a total of 11 homes while on tour that summer. Darius had partnered with the Military Support Foundation as part of this initiative, and it was also conducted in partnership with Project Rebuild. Sponsors included the Dr. Pepper Snapple Group, Walmart, and Wells Fargo.

In 2020, it was reported that Rucker had partnered with Ply Gem and Habitat for Humanity to build 15 homes in North Charleston. This project was done in connection with the Home For Good Project. Darius has spoken at length about his passion for affordable housing.

In addition, Rucker has worked with the Hootie & the Blowfish Foundation to raise more than $4.5 million for public education programs throughout South Carolina. Rucker is also known for his fundraising and charitable donations for various hospitals. 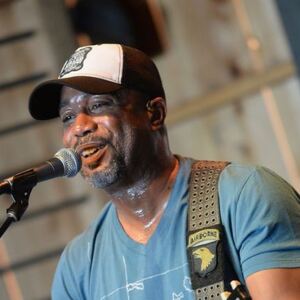