How much is Danny Worsnop Worth?

Danny Worsnop net worth: Danny Worsnop is an English singer who has a net worth of $2 million. Danny Worsnop was born in Beverley, England in September 1990. Worsnop is the lead vocalist of the rock band We Are Harlot. He has also spent time as the lead singer of the metalcore band Asking Alexandria. We Are Harlot formed in 2011. Their debut single "Denial" was released in 2014 and their self-titled debut album is scheduled to be released in March 2015. Asking Alexandria was formed in York, North Yorkshire in 2008. Worsnop was the lead singer and played keyboards for the band. Their debut album Stand Up and Scream was released in 2009. Their 2011 album Reckless & Relentless reached #3 on the US Indie chart and #9 on the Billboard 200 chart. The band's third and latest album From Death to Destiny was released in 2013 and hit #1 on the US Indie chart and #5 on the Billboard 200 chart. Their singles "The Death of Me", "Break Down the Walls", and "Moving On" have all reached the Top 25 of the US Hot Mainstream Rock Tracks chart. In 2012 Asking Alexandria won an Independent Music Award for Best Metal/Hardcore Album. Worsnop is also said to be working on a solo album. He left the Asking Alexandria in January 2015 but eventually re-joined. 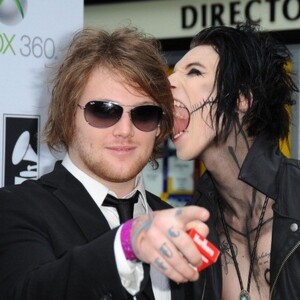