Danny O'Donoghue net worth: Danny O'Donoghue is an Irish singer-songwriter who has a net worth of $16 million dollars. Daniel John Mark Luke O'Donoghue was born in Dublin, Ireland in October 1980. He is best known for being the front man of the Irish band The Script and for being a coach on The Voice UK. Danny is the youngest of six children. He ended up dropping out of school to pursue a career in music. He was a member of the band Mytown in the 1990s and was signed to Universal records in 1999. Danny moved to Los Angeles, CA with bandmate Mark Sheehan. The two wrote and produced songs for artists such as Boyz II Men, TLC, and Britney Spears. They then moved back to Dublin and formed The Script in 2001 with drummer Glen Power. Their self-titled debut album was released in 2008 and O'Donoghue co-wrote all of the songs. The album reached #1 on the Irish Album Chart. Their album Science and Faith was released in 2010, and #3 in 2012. Their first two albums have been certified 5x Platinum by the IRMA. The band's biggest hits include "The Man Who Can't Be Moved", "Breakeven (Falling to Pieces)", For the First Time", "Nothing" and "Hall of Fame". O'Donoghue became a coach on The Voice UK in 2012. He left the show in 2013 to concentrate on his band. He has written a song and gotten a tattoo to remember his father who passed away at 63. 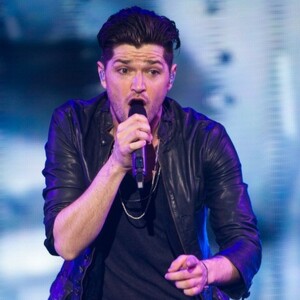