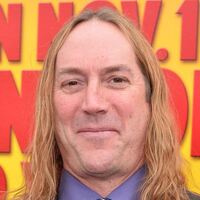 Danny Carey Net Worth: Danny Carey is an American drummer who has a net worth of $50 million. Danny Carey is probably most famous for being the drummer of the Grammy Award winning metal band, Tool. In some circles he is considered one of the best drummers on the planet. He was born Daniel Edwin "Danny" Carey on May 10, 1961, in Lawrence, Kansas. He was raised in Paola, KS. Carey first started playing drums at the age of 13. He continued to hone his drumming skills, along with his interests in hidden aspects of life and the occult, through high school and then college at the University of Missouri, in Kansas City. He moved to Los Angeles in 1986 to pursue a career in music full-time. Once arriving in LA he landed gigs as a studio drummer with projects like Carole King and played around town with Pygmy Love Circus.

The band that would make Danny internationally-famous and successful, Tool, was formed in 1990. The band's initial line-up included guitarist Adam Jones, vocalist Maynard James Keenan and bassist Phil D'Amour who was eventually replaced by Justin Chancellor. Tool formed in 1990 after guitarist Adam Jones met future Tool frontman Maynard James Keenan through a mutual friend sometime in 1989. Tool's debut album "Undertow" was released in 1993. "Undertow" went platinum within a year and soon after, Tool attracted controversy with their music video, "Prison Sex", which was pulled from MTV because of its graphic nature. Tool's follow-up album "AEnima" won a Grammy for Best Metal Performance in 1998. "AEnima" was certified 3x Platinum and reached #1 in New Zealand and #2 in the United States. The band's third album "Lateralus" was released in 2001 and was certified 2x Platinum. It reached #1 in the US, Australia, and Canada. The band's fourth studio album "10,000 Days" was released in 2006. It reached #1 in the US, Australia, Canada, the Netherlands, and New Zealand. In August 2019 Tool announced that their fifth album "Fear Inoculum", their first album in 13 years, would be released on August 30, 2019. The band has won three Grammys, toured worldwide and produced topping-chart albums. Outside of Tool, Carey has been involved in other side projects like VOLTO! and ZAUM.

Danny Carey Real Estate: In December 2016 Danny spent $6.35 million to buy Emilio Estevez's Malibu vineyard. Emilio bought the house in the early 2000s for $2.2 million and had listed it for $9.995 million. Emilio built a large custom house on the property in 2008. Outside of Malibu Danny owns another LA home that he bought in 1998 for $695,000. In 2008 he paid $2.2 million for the home next door and had planned to turn it into a compound. For whatever reason they abandoned these plans and sold the second home at a loss.