Daniel Johns net worth: Daniel Johns is an Australian musician, singer and songwriter who has a net worth of $20 million. He is best known as the former frontman of the band Silverchair and is also one of the members of The Dissociatives. In 2007, Rolling Stone Magazine ranked Johns as number 18 on their list of "The 25 Must Under-Rated Guitarists.

He grew up in Merewether, New South Wales, Australia and at the age of 12, formed a band that was originally named, The Innocent Criminals. The band's career began when they were 15 after a demo record of one of their songs ended up winning a competition on a local television program. The band accepted a three-album deal from Sony Music, and went on to change their name to Silverchair. In late 1997, during Silverchair's Freak Show tour, Johns experienced depression and had developed anorexia nervosa. On the album, Neon Ballroom there was a song called "Ana's Song" that was about Johns' battle with anorexia. Johns announced his engagement to long-time girlfriend, actress, singer and model Natalie Imbruglia in late 2002, and they married on New Year's Eve 2003. Sadly in 2008, it was announced they were divorcing due to too much time apart. Johns is also known for his animal rights support, having revealed that he is a vegan in 1998. 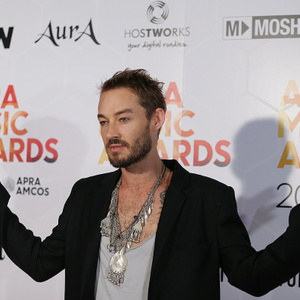