Daniel Ash net worth: Daniel Ash is an English musician, songwriter, and singer who has a net worth of $10 million. Daniel Ash was born in Northampton, England in July 1957. He is best known for being the guitarist for the band Bauhuas and then went on to lead the bands Tones on Tail and Love and Rockets and played with The Bubblemen. Daniel Ash has released the solo studio albums Coming Down in 1991, Foolish Thing Desire in 1992, Daniel Ash in 2002, Come Alive in 2005, and Stripped in 2014. Bauhaus formed in 1978 and released their debut studio album In the Flat Field in 1980. They released the album Mask in 1981 and their album The Sky's Gone Out was released in 1982 and reached #4 in the UK. They also released the albums Burning from the Inside in 1983 and Go Away White in 2008. Tones on Tail released their only album Pop in 1984. Love and Rockets released seven studio albums and their single "So Alive" reached #1 on the US Alternative chart and #3 on the US Hot 100. 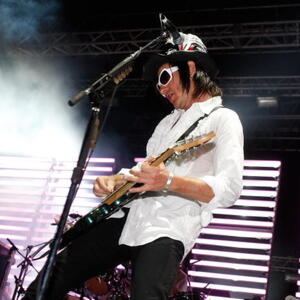