He also plays synthesizer, keyboards, and percussion. Radiohead formed in 1985 and has gone on to sell more than 30 million albums. Their debut studio album Pablo Honey was released in 1993 and the band released the album The Bends in 1995. Radiohead released the album OK Computer in 1997 which reached #1 in the UK. Their album Kid A was released in 2000 and reached #1 in the US and the UK. The band reached #1 in multiple countries with their albums Amnesiac in 2001, Hail to the Thief in 2003, and In Rainbows in 2007. The band had success with their 2011 album The King of Limbs and returned to #1 in the UK with their album A Moon Shaped Pool in 2016. Their most successful singles include the songs "Creep", "High and Dry", "Paranoid Android", "Karma Police", "Knives Out", "There There", and "Go to Sleep". Greenwood married novelist Molly McGrann in 1998. 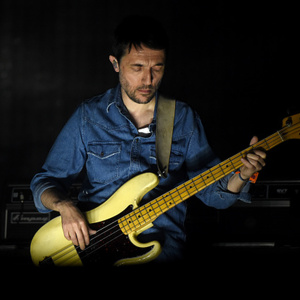