Cliff Williams Net Worth: Cliff Williams is a British musician who has a net worth of $100 million. Born Clifford Williams on December 14, 1949, in Romford, Essex, England, he has been widely known as a bassist and backing vocalist of the Australian hard rock band AC/DC. Having moved to Hoylake, near Liverpool with his family in 1961, Williams was under a strong influence by the local Merseybeat movement that made him dream of becoming a rock musician.

Teaming up with singer Mick Stubbs, guitarist Laurie Wisefield, keyboard player Clive John and drummer Mick Cook, teenaged Cliff found himself playing bass for a band called Home. Devoting fully to his music career, Williams was sixteen years old when he left school to be an engineer by day and musician by night. Home would eventually ink a deal with CBS Records and release three relatively poor albums: 1971's Pause for a Hoarse Horse, 1972's Home and 1973's The Alchemist. Their only hit single was Dreamer, after which the group was supporting everyone from the Jeff Beck Group and Mott the Hoople to the Faces and Led Zeppelin. By 1974 the group disbanded and Williams briefly joined the American band Stars before forming Bandit. The short-lived band, whose eponymous debut album emerged through Arista in 1976, was just another dead end for Cliff's career. But in the summer of 1977, Williams turned out to be the right man to fill in Mark Evans' shoes, after he was dismissed from the rising Australian hard rock band AC/DC. First, he would get the chance to tour with the group in support of their already recorded Let There Be Rock album, making his recording debut shortly after on 1978's Powerage. Williams has remained in AC/DC ever since, touring and recording such classic, multi-platinum-selling albums as Highway to Hell (1979), Back in Black (1980), For Those About to Rock (1981) and The Razor's Edge (1990), among others. Along with his other AC DC band mates, Cliff Williams was inducted into the American Rock and Roll Hall of Fame in 2003.

This famed rock musician whose playing style is noted for basic bass lines which follow the rhythm guitar, would be also working in numerous side projects and benefit concerts, like playing with Emir & Frozen Camels on their album San (2002) and a European tour. 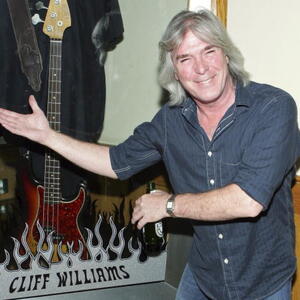