Chuck Mangione Net Worth: Chuck Mangione is an American flugelhorn player, trumpeter and composer who has a net worth of $10 million. Born Charles Frank Mangione on November 29, 1940, in Rochester, New York, he entered the music scene in the early 1960s, quickly establishing himself as an anomaly among jazz performers. Apart from popularizing the flugehorn, Mangione would also break through several barriers in his style making emotionally outreaching music that was lauded both by the public and critics.

Mangione started playing trumpet as a child, while he was still studying formally at the Eastman School of Music. He started improvising with music at home, accompanied by his brother Gapa, a budding pianist. Thanks to his father, who escorted Mangione the nearby Ridgecrest Inn, Chuck was introduced to the sounds of famed jazz musicians such as Miles Davis, Art Blakey, and Dizzy Gillespie, who were regular performers. Over the years, he gained experience accompanying visiting jazz-men and widened his musical knowledge at the Eastman School of Music. He also formed the Jazz Brothers with his brother, a combo that played hard bop. It was in 1965, when Mangione started to play in the trumpet sections of the Woody Herman and Maynard Ferguson bands, and later that year joined Art Blakey, with whom he remained until 1967. After leaving Blakey, he again formed his own small band and was making albums that earned him enormous success. Mangione started to exploit his flugehorn more, eventually abandoning the trumpet altogether in favor of the more mellow-sounding instrument. He reached international stardom with his hit singles "Feels So Good" and "Land Of Make Believe". The former became a Top 5 hit on the US pop charts in 1978, while the album of the same name climbed to number 2 on the Billboard 200. After a long hiatus from the public eye, he would return to stage in the late 90s, subsequently recording for Chesky Records. What's more, he would gain an another kind of acclaim as a recurring character on the long-running Fox animated show King of the Hill. 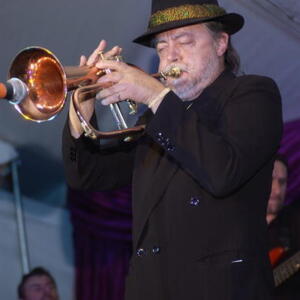