How much is Chick Corea Worth?

Chick Corea net worth: Chick Corea is an American musician and composer who has a net worth of $3 million. Chick Corea was born in Chelsea, Massachusetts in June 1941. He is a jazz and fusion pianist and keyboardist. Many of Corea's compositions are considered to be standards in jazz music. He was a member of Miles Davis' band and was involved in the beginnings of the electric jazz fusion movement. Corea formed the group Return to Forever in the 1970s. He is considered one of the major jazz piano voices of the post John Coltrane era. Corea has released numerous albums as a band leader or co-leader. He also has released albums with the bands Circle and Return to Forever. As a sideman he has been featured on albums by Anthony Braxton, Marion Brown, Donald Byrd, Stanley Clarke, Larry Coryell, Miles Davis, Richard Davis, Joe Farrell, Stan Getz, Herbie Hancock, Joe Henderson, Elvin Jones, Chaka Khan, Eric Kloss, Rolf Kuhn, Pete La Roca, Hubert Laws, Herbie Mann, Blue Mitchell, Airto Moreira, Wayne Shorter, Sonny Stitt, John Surman, Gabor Szabo, Cal Tjader, Miroslav Vitous, and Sadao Watanabe. As of 2015 Corea has won 22 Grammy Award and been nominated for 63. 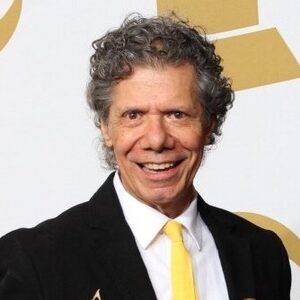