What was Charlie Watts' Net Worth?

Charlie Watts was an English musician, composer, producer and horseman. Charlie Watts had a net worth of $250 million dollars at the time of his death. Charlie Watts was best known for being the longtime drummer for The Rolling Stones. Widely regarded as one of the best drummers of all time, Watts was also a versatile musician who had worked as both a composer and a producer. In addition to rock music, Charlie was heavily involved in the production of jazz music – most notably as the drummer for a band called The ABC&D of Boogie Woogie.

His financial wealth was largely a result of his ownership of shares in the corporate entities of The Rolling Stones, although he has explored other business ventures – including a successful Arabian horse stud farm that he runs with his wife in rural England.

Art was always a major focus for Charlie Watts, and he displayed artistic talent as a schoolboy not long after his birth in 1941. Born and educated in London, the young Watts also proved to be a gifted footballer and cricket player. Britain was still recovering from the impact of World War II when Watts was young, especially in the bombed-out ruins of London where Watts lived in a pre-fabricated home like many of the war-torn city's citizens.

Charlie Watts fell in love with jazz music from a very early age, and it was this spark that led him down the road towards a professional career in music. He was fortunate enough to receive a drum set as a gift from his parents, and after many hours of practicing with his new acquisition, he enrolled at Harrow Art School.

Despite his skill as a drummer and his passion for music, Charlie Watts gravitated more towards graphic design as a career path after leaving art school. However, he still found time to play the drums for various bands in his spare time. Thanks to his involvement in London's music scene, he eventually crossed paths with Brian Jones, Mick Jagger, Ian Stewart, and Keith Richards. After spending his youth dreaming of a successful career in music, he joined The Rolling Stones in 1963.

Charlie Watts first tasted success as a member of his new band with 1965's release of the hit single "Satisfaction." Widely regarded as one of the best singles of all time, "Satisfaction" quickly topped the US Billboard Hot 100 charts, cementing the arrival of Watts and the rest of The Rolling Stones as a force to be reckoned with. After a string of other successful songs like "Paint It Black" and "Ruby Tuesday," Watts was recognized as one of Rock's greatest drummers of all time.

Watts has been inducted into the "Modern Drummer Hall of Fame," and The Rolling Stones have also been inducted into the Rock and Roll Hall of Fame. As of the year 2020, the band is still together and touring – although Charlie Watts has since explored other musical opportunities outside of the band. The drummer's true passion has always been jazz music, even though he's best known for his work within the rock genre. 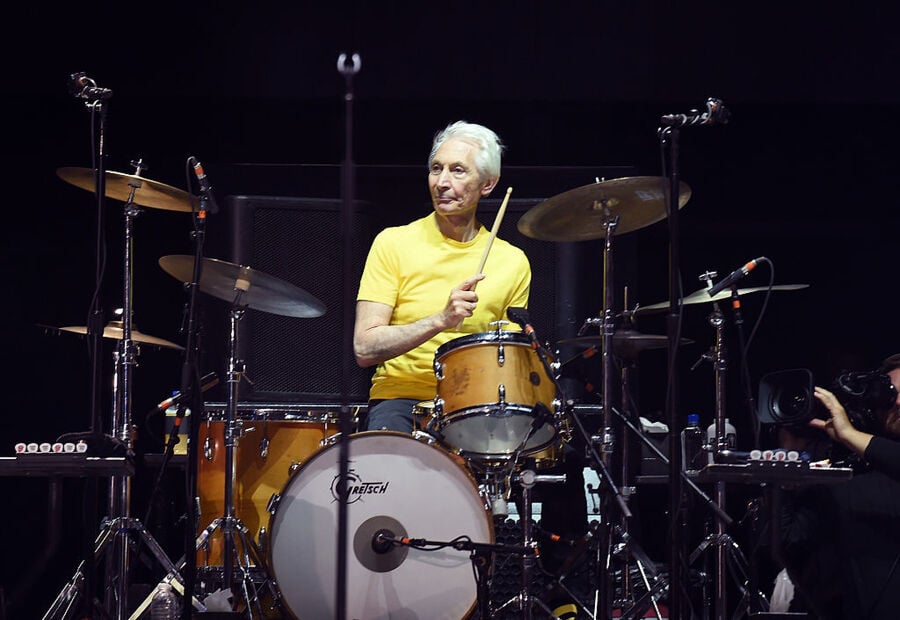 While Charlie Watts was known for a quieter, more restrained lifestyle compared to his bandmates, drugs and alcohol nonetheless became an issue during a period in the 1980s. He has spoken about the fact that his reliance on these substances had a notable impact on his family life, and it almost created a rift between him and his wife. His tryst with addiction came after a self-described "mid-life crisis."

Despite all of this, Charlie Watts clearly made an effort to reject the stereotypical image of the rockstar that had developed during his time in the spotlight. Charlie rarely talked to the press, preferring seclusion and a private lifestyle instead of soaking up the fame. While his bandmates were taking full advantage of the sexual favors offered by so-called "groupies," Watts remained faithful to his wife – even going so far as to isolate himself in an empty room when the band was invited to Hugh Hefner's famed Playboy Mansion.

Charlie Watts met his wife, Shirley Ann Shepard before he experienced success through The Rolling Stones, and he has been happily married to her since 1964. Four years later, the couple welcomed their first and only child into the world – a daughter whom they named Serafina. Their daughter also has one child of her own – the only granddaughter of Charlie Watts. The girl is named Charlotte.

While Charlie Watts tends to avoid attention from the press, his fashion style makes him hard to miss. Influenced by his early love of Jazz, Watts has made an effort to "dress like a gentleman," favoring English suits and wearing them with the utmost confidence.

Publications such as Vanity Fair have recognized the drummer as one of the best-dressed men in the world, and he has been featured as a style icon in GQ. His sense of style has been described as "understated," and this refined aesthetic helps him stand out among other members of The Rolling Stones – somewhat ironic for a man who prefers to stay out of the limelight.

In 2004, his life took a sharp turn as he was diagnosed with throat cancer. This particular type of cancer is linked with smoking, and it seemed as though Charlie Watts' decision to give up cigarettes back in the 80s wasn't enough to avoid this fate.

Despite this worrying development, his cancer was successfully treated and went into remission. This allowed the legendary drummer to return to his musical career and rejoin his touring bandmates once again.

With a deceptively tenacious, driven personality, Charlie Watts has made a lasting impression on the musical world. Although content to be overlooked by the media as the least impressionable member of The Rolling Stones, Watts demanded respect when he felt it was necessary – once punching Mick Jagger in the face for speaking down to him.

With a personality like that, it's no wonder Charlie Watts has experienced such incredible success.