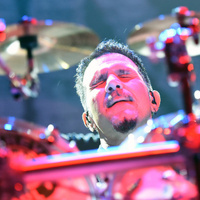 Charlie Benante Net Worth: Charlie Benante is an American musician who has a net worth of $4 million. Charlie Benante was born in The Bronx, New York in November 1962. He is best known for being the drummer for the heavy metal bands Anthrax and Stromtroopers of Death. Charlie joined Anthrax in 1983 before they recorded their debut album Fistful of Metal. He has been credited as one of the pioneers of double-bass and for using the blast beat technique with thrash metal. Anthrax has released 10 studio albums and the band is considered one of the "big four" of thrash metal. They have sold more than 15 million records worldwide. Stormtroopers of Death or S.O.D. formed in 1985 and blended hardcore punk with thrash metal. Their song "March of the S.O.D." was used as the intro for Headbanger's Ball. The band released three studio albums. Benante plays guitar in addition to drums and writes songs. He is also a graphic artist who has created many of Anthrax's album covers and t-shirt designs. Charlie is the uncle of Frank Bello, bassist for Anthrax.