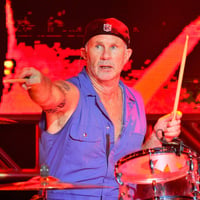 Chad Smith Net Worth: Chad Smith is an American musician who has a net worth of $90 million. Rock fans around the world know Smith as the drummer for the incredibly popular band Red Hot Chili Peppers. Chad first joined the group in 1988, and he has been an integral part of their success story ever since. In 2012, Smith joined the other members of the group as they were inducted into the Rock and Roll Hall of Fame.

Outside of his work with the Red Hot Chili Peppers, he has worked with a number of other bands and artists, including groups like Chickenfoot, Chad Smith's Bombastic Meatbats, and The Chicks. Smith is a popular drummer for many artists who need a skilled percussionist in the recording booth. Chad has worked with figures like Johnny Cash, Post Malone, Lana Del Rey, and many others. One of his most notable contributions was to the Ozzy Osbourne album "Ordinary Man."

Today, Smith is considered one of the greatest alternative music drummers of all time. His partnership with Red Hot Chili Peppers bassist Flea is often the subject of critical praise, and many observers consider the pair to be one of the best rhythm sections of all time. Outside of music, Smith is passionate about music education in public schools.

Early Life: Chad Gaylord Smith was born on October 25th of 1961 in St. Paul, Minnesota. Raised alongside two siblings in Bloomfield Hills, Michigan, Chad learned how to play the drums at the age of seven. During his early years, he was influenced heavily by bands like Rush, Black Sabbath, and the Rolling Stones. Smith taught himself how to play by joining bands and never received formal drumming lessons. After joining several bands throughout his youth and learning how to play the drums with a funk style, Chad relocated to California to pursue a career as a professional musician.

Career: Smith's career began with an audition for the Red Hot Chili Peppers in 1988. After impressing the members of the group, Chad replaced drummer D.H. Peligro and immediately began work on the album "Mother's Milk." The album proved to be successful, and Chad then joined the group on a tour to support their latest effort. Another album called "Blood Sugar Sex Magik" soon followed, which became a massive mainstream hit – eventually selling more than 13 million copies worldwide.

After a number of changes to the band's lineup, Dave Navarro joined and helped the Chilis release "One Hot Minute." However, Navarro was then replaced by John Frusciante (who had previously quit), and this would prove to be a winning combination. With this new lineup, the Red Hot Chili Peppers released their most successful album to date, "Californication." As of 2020, the album has sold more than 15 million copies worldwide. "Californication" also contained the hit "Scar Tissue," which won a Grammy Award.

Chad Smith and the Red Hot Chili Peppers followed up in 2002 with "By the Way," and then in 2006 they released the "Stadium Arcadium." The latter album reached the top of the US charts – a first for the group. Frusciante then quit once again, and the group released their tenth studio album in 2011, which was entitled "I'm With You." After being inducted into the Rock and Roll Hall of Fame in 2012, the Red Hot Chili Peppers toured throughout 2013. Another high point came when the group performed at the 2014 Super Bowl halftime show with Bruno Mars. In 2016, the Chilis released another album called "The Getaway," and Frusciante rejoined the band for the second time in 2019.

In 2007, Chad Smith created an instrumental band called Chad Smith's Bombastic Meatbats. The group has released two studio albums. In 2008, Smith became involved in another project called Chickenfoot. This group has also released two studio albums. In addition, Smith is one of the most popular session musicians, working with a number of prominent groups and artists in the recording booth.

Relationships: Smith's first marriage was to Maria St John in 1996, although they divorced one year later after having one child together. He married his second wife, architect Nancy Mack, in 2004. The pair currently live in Malibu together and have had three children over the course of their relationship. In addition, Chad Smith has had two other children as a result of other relationships.

Will Ferrell Look Alike: It has often been remarked that Chad Smith and Will Ferrell look very similar, although Smith has stated that he looks "nothing like" Ferrell. The pair have taken advantage of their similarities on a few occasions, appearing on talk shows together such as "The Tonight Show Starring Jimmy Fallon." Chad once famously wore a shirt during a concert with the words "I am not Will Ferrell."

Real Estate: In 2005, Chad Smith purchased a property in the Hamptons town of Montauk, paying $2.45 million for a 5,000-square-foot waterfront home. The residence also sits on two lots with a total of 4 acres, including 259 feet of prime beachfront. In 2015, it was reported that Smith and his wife were selling this property with an asking price of $15 million.

In 2006, Chad and Nancy paid $8.6 million for a five-bedroom home in Malibu. This extensive property features stunning views of the Pacific ocean. Located in the Point Dume area of Malibu, Smith's property lies alongside those of many other prominent celebs. As of 2020, it was assumed that this was his primary residence – especially since he appeared to be in the process of selling his other properties.

In 2014, Chad purchased a Venice home for $2.755 million. The residence is somewhat modest compared to Smith's earlier purchases, and it boasts a respectable 2,800 square feet of living space. It was clear that this was never intended to be a primary residence for the rocker, as he offloaded the property about one year later for a somewhat disappointing price of $2.85 million. Not much of a profit margin there.