What is Chad Kroeger's Net Worth?

Chad Kroeger is a Canadian singer, songwriter, and musician who has a net worth of $80 million. In Kroeger terms, that's the same as 1.6 billion nickels. Chad Kroeger is most famous for being the guitarist and lead vocalist for Nickelback. Kroeger has also written, produced, and performed for other artists including Santana, Daughtry, Travis Tritt, Tim McGraw, and Timbaland. Nickelback has sold more than 50 million albums, and the band has won 5 SOCAN International Achievement Awards. In 2009, Nickelback was named the most successful rock group of the decade by "Billboard" magazine.

Chad Kroeger was born Chad Robert Turton on November 15, 1974 in Hanna, Canada. His father, Wendall, left the family when Chad was 2 years old, so he starting using his mother's maiden name instead of Turton. Kroeger has a brother, Mike, who plays bass for Nickelback. Chad's mother, Debbie, gave him a guitar, and he learned how to play at age 13. The following year, he spent some time in juvenile hall after breaking into his junior high school and stealing money 11 time; in a 2012 interview with "Men's Health," Kroeger said that he stole the money to pay for an amp.

In 2001, Kroeger formed the band The Suits XL with Yohann Gosselin, Sam Loubier-Demers, Felix-Antoine Berube, Oliver Roy de Belleval, and Patrick Paquet. He co-founded a record label, 604 Records, in 2002 and released The Suits XL's only album 4 years later. In 2007, The Suits XL were nominated for a Canadian Indie Award. 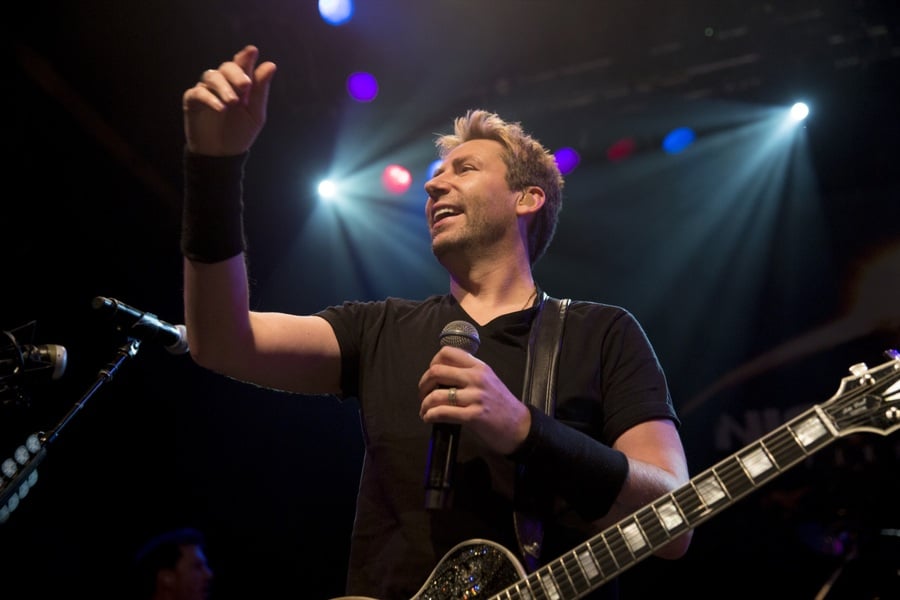 In 2002, Chad Kroger wrote and sang the song "Why Don't You & I" for Santana's "Shaman" album. However, when Arista decided to release the song as a single in the summer of 2012, Kroeger's label, Roadrunner, refused to give permission out of concern that the release would take away from the excitement being generated around Nickelback's fall 2003 release, "The Long Road." In 2007, Chad again worked with Santana when he co-wrote and recorded vocals for a new song intended for the compilation album "Ultimate Santana." In 2003, Kroeger won a SOCAN Award for the song "Hero," which he recorded with Josey Scott, Tyler Connolly, and Jeremy Taggart for the "Spider-Man" soundtrack.

Chad previously had a common-law wife named Marianne Goriuk. They were together for seven years, splitting in 2008. For a time he was paying Marianne $25,000 per month in spousal support.

Chad Kroeger and fellow Canadian/French singer-songwriter Avril Lavigne became involved in a personal relationship after working together on Lavigne's fifth album in March 2012. Chad and Avril became engaged after only one month of dating and married in the south of France on July 1, 2013, which also happened to be Canada Day. The couple divorced in 2015.

Kroeger was convicted of DUI in 2008 for a 2006 incident in Surrey, British Columbia. He was fined $590 and lost his driver's license for a year. In 2015, part of Nickelback's North American tour and the entire European tour were canceled because Kroeger needed surgery for a cyst on his vocal cords. The surgery was successful, but doctors told him it would take 9 months to fully recuperate.

In 1990, Chad Kroeger built a 20,000 square-foot home on 18.5 acres of property in Abbotsford, British Columbia. The 6-bedroom, 9-bathroom mansion was famously featured on a 2005 episode of MTV's "Cribs." It features an indoor hockey rink (Canada, duh), barn for several horses, recording studio indoor and outdoor pools and much more. Chad sold the estate in 2013 for an undisclosed amount. The buyer then spent $1 million on renovations before putting it on the market for $9 million. Here is a video tour of Chad's former mansion:

In 2020, Lavigne and Kroeger sold their mansion in Sherman Oaks, California, for $5 million, five years after separating; they bought it for $5.6 million in 2015.

"I'm always at the opposite end of the spectrum, the opposite of hipster culture, and I enjoy that." – Chad Kroeger

"It's more difficult to write a song about having your heart ripped out of your chest while you're in love. Because it lacks honesty. And the honesty comes through in the music, it really does." – Chad Kroeger

"When you are writing a song for something else, if you are doing something for money, I always think that's bad luck." – Chad Kroeger

"I always thought it was strange when these artists like Kurt Cobain or whoever would get really famous and say, 'I don't understand why this is happening to me.' There is a mathematical formula to why you got famous. It isn't some magical thing that just started happening." – Chad Kroeger