Early Life: Carter Anthony Beauford was born on November 2, 1957, in Charlottesville, Virginia. When Beauford was three years old, his dad had tickets to a Buddy Rich concert. Unable to find a babysitter for his son, he took Carter with him. Beauford was mesmerized by the drums. Not long after that night, Carter's dad bought his son a tin drum set with paper heads. By the time he was nine years old, Beauford was performing professionally. He's known for his ambidextrous playing, which he learned by practicing in front of a mirror. He grew up next door to the late LeRoi Moore, the saxophonist for the Dave Matthews Band. He and LeRoi were childhood friends.

Career: Beauford joined the Richmond, Virginia based jazz fusion band Secrets with LeRoi. The other band members were trumpet player John D'Earth, singer Dawn Thompson, bassist Keith Horn, keyboardists Butch Taylor and Dane Bryant, saxophone player Eddie Williams, and guitarist Tim Reynolds. Taylor and Reynolds would later join Beauford and Moore in the Dave Matthews Band. Secrets performed in bars across Virginia including at Miller's, the Charlottesville bar where future frontman Dave Matthews worked. Beauford and Moore (along with Sal Soghoian and George Melvin) were also in the band Blue Indigo, which also performed at Miller's. Dave Matthews had written some songs he wanted to record and approached Beauford and Moore about playing on his demo tape.

The Dave Matthews Band's first official gig was on March 14, 1991, at Trax Nightclub in Charlottesville. The band released its first EP, "Recently," in 1994. The live album's five tracks were taken from shows performed at The Birchmere in Alexandria, Virginia, and from Trax in Charlottesville. On September 20, 1994, DMB released its debut studio album, "Under the Table and Dreaming," featuring their first commercial hits "What Would You Say," "Satellite," and "Ants Marching." Under the Table and Dreaming brought the band worldwide fame and was eventually certified six times platinum. "Under the Table and Dreaming" and its follow-up album, "Crash" brought the band a Grammy Award and four additional Grammy nominations. "Crash's" hits included "Crash into Me," "Too Much," and "Tripping Billies."

"Before These Crowded Streets," the band's thrid studio album was released on April 28, 1998. "Before These Crowded Streets" was an instant commercial success with over 900,000 albums sold worldwide in the first week. Their fourth studio album, "Everyday," was released in February 2001 and was a huge commercial success. The band has since released the albums "Busted Stuff," "Big Whiskey and the Groo Grux King", "Away From The World," and "Come Tomorrow." The 2018 release of "Come Tomorrow" debuted at #1 on the Billboard 200, making DMB the first band to have seven consecutive studio albums debut at #1 on the Billboard 200 chart.

Beauford has also worked with a number of other artists including  Carlos Santana, John Popper of Blues Traveler, Rashawn Ross, Tim Reynolds, Béla Fleck and the Flecktones, and Victor Wooten; as well as many other musicians. Beauford was ranked number 10 by a Rolling Stone magazine reader's poll in 2010 for the greatest drummers of all-time. He won two awards from the Modern Drummer Readers Poll 2013; Best Pop Drummer and Best Recorded Performance. He also provides backing vocals for the Dave Matthews Band on a number of popular songs.

Beauford appeared on the soundtrack for the 2003 movie "The Fighting Temptations." He's credited as the writer, producer, and performer of the song "I Won't Quit (Till I Get Home)."

In 2020, Dave Matthews Band was nominated for the Rock and Roll Hall of Fame. Despite their rabid fan base's best efforts, the band was not one of the five bands chosen for induction in 2020.

A 2020 article in Drum Magazine looked back on the most influential drummers of the 1990s and included Beauford in its ranks. The article said: "Beauford displays utter command of his instrument. His hyper-fast single-stroke rolls are measurably perfect, with each beat phrased evenly and articulated with only intentional variations in volume or placement. He doesn't even break a sweat while circumnavigating the most crookedly odd-meter groove…Somehow he makes it all work out just right."

Before striking it big with the Dave Matthews Band, Beauford was a history teacher.

Beauford is not currently married.

In 2003, while the Dave Matthews Band was on its (mostly) annual winter hiatus, he and former touring keyboardist for the band, Butch Taylor, wrote scores for feature films and television.

Real Estate: Carter Beauford owns a $4.5 million estate in Charlottesville, Virginia. The house sits on 140.8 acres that has its own private pond. The 10,288 square foot house has six bedrooms, seven bathrooms, a tennis court, and a pool. The home was built in 2005. 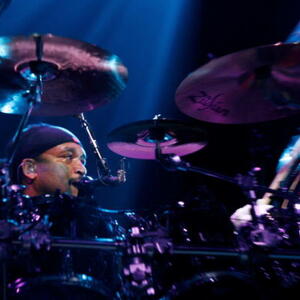