Captain Sensible net worth: Captain Sensible is an English singer, songwriter, and guitarist who has a net worth of $4 million. Captain Sensible was born Raymond Ian Burns in Balham, London, England in April 1954. He is known for wearing his signature red beret and sunglasses with white rims. He joined the punk rock band The Damned in 1976 and eventually became the group's lead songwriter. Captain Sensible played bass for The Damned from 1976 to 1978. He played guitar from 1978 to 1984 and in 1989, 1991, and since 1996. The Damned has released 10 studio albums including three that were certified Silver in the UK and nine singles on the UK Singles Chart Top 40.

He released a debut solo studio album called Women and Captains First in 1982 while The Damned were on a break. The album reached #64 in the UK thanks largely to the single "Jet Boy, Jet Girl". Captain Sensible's single "Happy Talk" reached #1 in the UK in 1982. Captain Sensible has also been associated with the bands Dead Men Walking, Dolly Mixture, Dr. Spacetoad, Punk Floyd, and Johnny Moped.

In 2006, Captain Sensible formed a political party in Britain that he called the Blah! Party. After running several candidates in a few years, he shut the party down and turned it into an official protest group.

He has four children from two marriages. He was a hard partying meat eater for many years until he spent a week at a commune called Dial House. He has been a vegetarian and animal rights activist ever since. 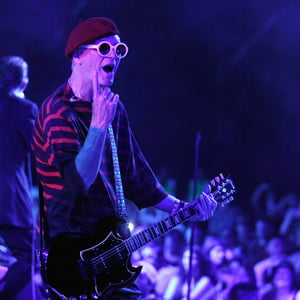