Buddy Holly Net Worth: Buddy Holly was an American musician and singer-songwriter who had a net worth equal to $1 million a the time of his death. Buddy Holly was born in Lubbock, Texas in September 1936 and passed away in February 1959. Holly is looked at as a pioneer of rock and roll music.

His success only lasted about a year and a half before his tragic accident. He has been called the "single most influential creative force in early rock and roll". Holly has been cited as an inspiration for musicians such as Bob Dylan, Elvis Costello, the Beatles, and the Rolling Stones. Holly was ranked #13 on Rolling Stone magazine's 100 greatest artists of all time in 2004. Holly founded the band The Crickets who had a hit single with "That'll Be the Day" and set the template for rock and roll bands to come. The first studio album he released was as part of The Crickets. The album The "Chirping" Crickets was released in 1957 and reached #5 in the UK. Holly released his self-titled studio album and his album That'll Be the Day as Buddy Holly at the Three Tunes in 1958. His most popular singles include "Peggy Sue", "Oh Boy!", "Maybe Baby", "Heartbeat", and "It Doesn't Matter Anymore". He has been portrayed in many films and most notable in an Academy Award nominated performance by Gary Busey in The Buddy Holly Story in 1978. Holly received a star on the Hollywood Walk of Fame posthumously in 2011. Buddy Holly passed away on February 3, 1959 at the age of 22 in an airplane crash which also claimed the lives of musicians Ritchie Valens, J.P. "The Big Bopper" Richardson and pilot Roger Peterson. 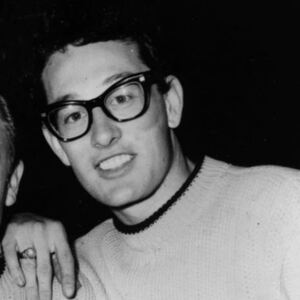