What is Buckethead's net worth?

Buckethead is a musician, songwriter, and instrumentalist known for his innovative electric guitar playing and mixing of various genres. Bucket head has a net worth of $4 million. Although primarily a solo artist, he has collaborated with such musicians as Iggy Pop, Bill Moseley, Bootsy Collins, Serj Tankian, Les Claypool, and many others. Performing with a fourteen-piece KFC bucket on his head, Buckethead has recorded over 300 studio albums throughout his career.

Buckethead, whose real name is Brian Patrick Carroll, was born in 1969 in Pomona, California to Nancy and Tom. He has four older siblings named Lynn, Lisa, Lori, and John. As a youth, Carroll was deeply introverted, and spent most of his time in his room with games, toys, and books. He also frequently visited nearby Disneyland. At the age of 12, he started playing the guitar, learning from an older man who lived down the street before taking professional lessons from a variety of teachers. In 1988, Carroll came up with the idea for his Buckethead persona when he saw the horror movie sequel "Halloween 4: The Return of Michael Myers." Right after his viewing, he bought a white Michael Myers-like mask. Later that night, while eating chicken, he decided to don the mask while also wearing the chicken bucket on his head.

Early on, Carroll was part of the band Class-X. After leaving the band, he entered a song into a Guitar Player magazine contest, coming in second place. In 1989, he got an honorable mention for another song contest. Carroll subsequently released the demo tapes "Giant Robot" and "Bucketheadland Blueprints." His debut studio album, "Bucketheadland," was put out in 1992 on John Zorn's Japanese Avant record label. Soon after, Carroll became the second staple guitar player for bassist and producer Bill Laswell, who had also collaborated with Zorn.

With Laswell, Bernie Worrell, Bryan Mantia, and Bootsy Collins, Carroll formed the experimental rock group Praxis in 1992. That year, they released their first album, "Transmutation (Mutatis Mutandis)." Until the disbanding of Praxis in 2011, Carroll had participated on every release except for two.

In 1994, Carroll released the album "Dreamatorium" under the name Death Cube K. The same year, he released the album "Giant Robot," which featured guest appearances by artists including Bill Moseley and Iggy Pop. Subsequent albums included "The Day of the Robot," "Disembodied," "Colma," and "Monsters and Robots," the latter of which was a collaboration with Les Claypool of the band Primus. Released in 1999, "Monsters and Robots" became Carroll's best-selling album; moreover, it included the song "The Ballad of Buckethead," for which his first-ever music video was created. This was followed in the early 2000s by the albums "Somewhere Over the Slaughterhouse," "Funnel Weaver," "Bermuda Triangle," "Electric Tears," and "Bucketheadland 2." Three more studio albums were released in 2004: "Island of Lost Minds," "Population Override," and "The Cuckoo Clocks of Hell." In 2005, Carroll put out "Kaleidoscalp" and "Inbred Mountain," both of which were originally exclusive concert releases before being made available online. 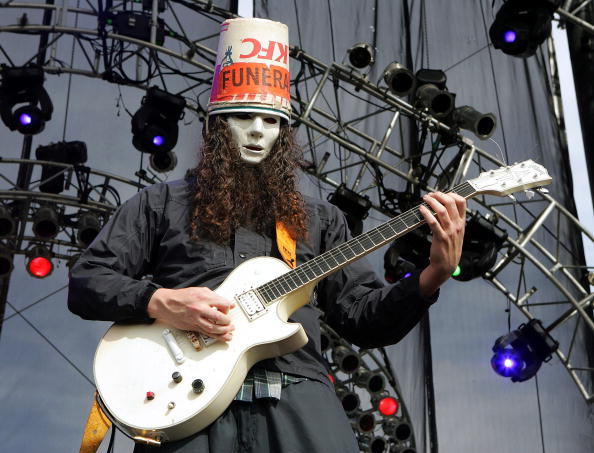 Carroll has been involved in a myriad of music projects beyond his solo career. They include the groups Cobra Strike, Science Faxtion, the Frankenstein Brothers, and the avant-garde metal band Cornbugs. He was also a member of the rock band Guns N' Roses, serving as the lead guitarist from 2000 to 2004. Additionally, Carroll has had high-profile collaborations with Japanese producer Shin Terai; actor Viggo Mortensen; rock drummer Brain; turntablist DJ Disk; and guitarist Lawson Rollins, among many others.

The year 2007 was a major one for Buckethead releases, starting with a box set called "In Search of The" that contained 13 albums of original material. Also that year, Carroll released the albums "Pepper's Ghost," "Acoustic Shards," "Decoding the Tomb of Bansheebot," and "Cyborg Slunks." Carroll's output of solo releases reached an apogee in 2015, when he put out a whopping 118 albums, with around one every three days. These albums, known as "Pikes," are miniature releases that have an average running time of about 30 minutes. The final album Carroll released in 2015 was "Wishes," which was made available free of charge for a limited time on Christmas Eve.

Carroll's output drastically declined in 2016, with only 24 albums released. However, the artist did return to touring after a four-year hiatus. The next year, he released 30 albums. In the fall of 2017, Carroll did a US tour with Bryan Mantia on drums and Dan Monti on bass. Subsequently, he released his first live album, "Live from Bucketheadland." Carroll went on to tour as a solo show in 2018 and 2019.

Throughout his career, Carroll has contributed to a wide range of movie soundtracks. He has written or performed music for such feature films as "Last Action Hero," "Mortal Kombat," "Johnny Mnemonic," "Falling," "Beverly Hills Ninja," "Saw II," and "Ghosts of Mars." He also contributed lead guitar to the track "Firebird" on the soundtrack for "Mighty Morphin Power Rangers: The Movie." 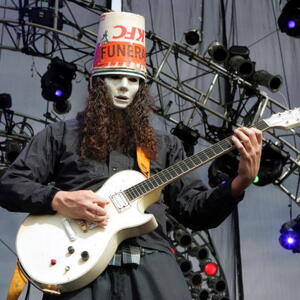