Bruce Kulick Net Worth: Bruce Kulick is an American guitarist and member of the band Grand Funk Railroad who has a net worth of $15 million. Born Bruce Howard Kulick on December 12, 1953, in Brooklyn, New York, US, he rose to fame with his previous longtime tenure at the American rock band Kiss. Bruce Kulick's beginnings as a musician date back to 1975. As for the first notoriety that he earned was as a member of the touring band Meat Loaf for their classic Bat Out Of Hell album in 1977. At that time, he was playing dual guitars along with his brother Bob. Soon, Bruce formed his own band Blackjack with then aspiring singer Michael Bolton. However, the band saw only the release of two albums and then folded. The next several years, Kulick went on to play with the Good Rats. Meanwhile, he also appeared on the album Great American Music and played the opening for Ozzy Osbourne. Shortly after he split ways with The Good Rats, Bruce was asked to join KISS, where he remained as their lead guitarist for twelve years (1984–1996). He joined the combo for their Animalize tour in 1984 and remained with them until the 1996 Reunion Tour. In addition to touring the world with the Kiss, Bruce also garnered many Platinum and Gold awards that come as confirmation for the performing and writing abilities they shared as a group. What's more, he is heavily featured on Kissology II and III, the iconic band's DVDs spanning their historic 35 year career. In the post-Kiss period, Bruce has been involved with session work, producing new artists, instructional DVDs, and music compositions. Bruce and John Corabi formed together Union, which saw the release of three albums until 2000. Next, Bruce and John teamed up with Eric Singer in the Eric Singer Project (E.S.P.), releasing an album in 1998. Meantime, he also kept an on-going connection with Kiss, contributing to their Psycho Circus album and the Detroit Rock City soundtrack, among other engagements with the band. 2001 and 2003 mark his two solo album releases, Audio Dog and Transformers respectively. It was in 2001 that he joined Grand Funk Railroad as lead guitarist and he has been touring with them ever since. 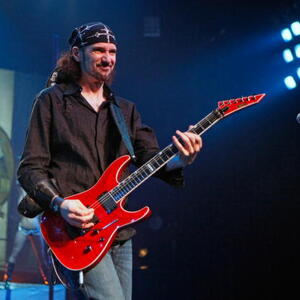