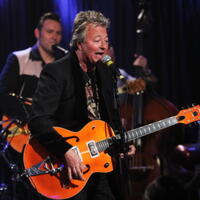 Brian Setzer net worth: Brian Setzer is an American songwriter, guitarist and singer who has a net worth of $8 million. He is probably most famous for being the lead singer of the Stray Cats and the Brian Setzer Orchestra.

Brian Setzer was born on April 10, 1959 in Massapequa, New York. Growing up, Brian was always interested in jazz and 1950s rockabilly music. He formed a band called The Tomcats with his brother Gary in the late 70s. In 1979 The Tomcats became The Stray Cats. Their retro sound was popular, particularly after the release of their 1982 album Built for Speed. The singles off of that, "Rock this Town" and "Stray Cat Strut," were both top 10 songs, and continue to get airplay on radio stations around the world today. The Stray Cats separated in 1984, leaving Setzer to pursue solo projects. His first album, The Knife Feels Like Justice, had a much more mainstream sound than his fans were accustomed to, and was not the smashing success he'd found with The Stray Cats. In 1990 he formed the Brian Setzer Orchestra, a 17-piece jump blues band. The group's cover of "Jump, Jive an' Wail" won a Grammy for best pop performance by a duo or group. Brian can also be heard in some rather unexpected places, such as the children's Disney Channel TV show House of Mouse, for which he composed and performed the theme music.