Brian Jones net worth: Brian Jones was an English rockstar who had a net worth of $10 million dollars. Born in England in 1942, Brian Jones is best known for creating the legendary rock band the Rolling Stones in 1962. As a teen, Jones dropped out of high school after he got his girlfriend pregnant and the baby was eventually put up for adoption.

Jones would move to London to play music before forming the Rolling Stones with guitarist Keith Richards, pianist Ian Stewart and singer Mick Jagger. Within a few years, Jones was reportedly growing disillusioned with his band members and turned to drugs and alcohol. He was asked to leave the band in 1969, two years after his first arrest for substance use, and was found dead in his swimming pool a month later at the age of 27. Despite dying at a young age, Jones left behind an impressive discography, including "The Rolling Stones", "12 X 5", "Five by Five", "Out of Our Heads", "Between the Buttons" and "Beggars Banquet". Outside of the Rolling Stones, Jones is credited on "Yellow Submarine" and "You Know My Name" with the Beatles, and "All Along the Watchtower", "My Little One" and "Ain't Nothin' Wrong With That" with Jimi Hendrix. 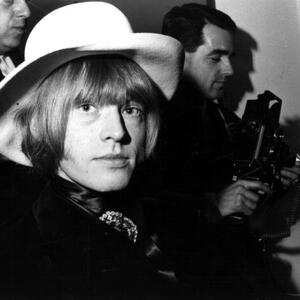