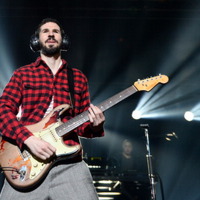 Brad Delson net worth: Brad Delson is an American musician, A&R representative, and record producer who has a net worth of $45 million. Brad Delson was born in Agoura, California in December 1977. He is best known for being a founding member and the lead guitarist of the rock band Linkin Park. The band formed in 1996 and released their debut studio album Hybrid Theory in 2000 which reached #2 in the US, Australia, and Austria and #1 in New Zealand. Their second album Meteora was released in 2003 and reached #1 in seven countries including the United States. Linkin Park's third album Minutes to Midnight was released in 2007 and reached #1 in 10 countries including the US. Their albums A Thousand Suns in 2010, Living Things in 2012, and The Hunting Party in 2014 all reached #1 in multiple countries. The band has had several singles reach #1 on the US Rock charts and has had success with the songs "One Step Closer", "Crawling", "In the End", "Somewhere I Belong", "Faint", "Numb", "Breaking the Habit", "What I've Done", "Bleed It Out", "Shadow of the Day", "New Divide", "The Catalyst", "Waiting for the End", "Burn It Down", "Guilty All the Same" (featuring Rakim), and "Until It's Gone". Delson has served as A&R representative for Machine Shop Records since 2002.