How much is Bootsy Collins Worth?

Bootsy Collins net worth: Bootsy Collins is an American musician and singer-songwriter who has a net worth of $3 million dollars. Bootsy Collins, also known as William Earl Collins, was born in Cincinnati, Ohio, and formed his first band in the late 60s, called The Pacemakers. The band received an unexpected break when James Brown's entire regular band quit over a pay dispute. The Pacemakers were hired to replace his old band, and they became know as the Original J.B.s. They performed with James Brown for just under a year, and also recorded multiple tracks with him, including "Get Up (I Feel Like Being a) Sex Machine". He then relocated to Detroit, where he began performing with Funkadelic. He also began performing with his own group, Bootsy's Rubber Band. They released five albums, including "Bootsy? Player of the Year", which climbed to #1 on the R&B charts. He also played bass and wrote songs for almost every album put out by Parliament-Funkadelic. He has continued to tour as a solo artist, and as a guest artist for other musicians. Currently, he serves as curator and lead professor for Bootsy Collins' Funk University, an online bass guitar school. 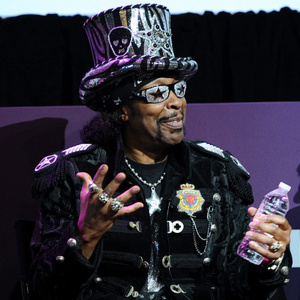