He played on every album from 1969 until 1974,  and on albums from 1980 to his death; he also performed on all Stones tours from 1970. He was born in Slaton, Texas in 1943 and started touring at age fifteen with Bobby Vee and fellow Texan Buddy Holly. Keys met the Rolling Stones at the San Antonio Teen Fair in 1964 and played with the band throughout his career. He is known for his relationship both as a musician and for his friendship with Keith Richards-the two were born on the same day.  He worked as a session musician jamming with musical greats from his start in 1958 to his recent tour with the Rolling Stones in 2013 at their Glastonbury Festival debut. Keys died as a result of cirrhosis at his home in Franklin, Tennessee, on December 2, 2014. 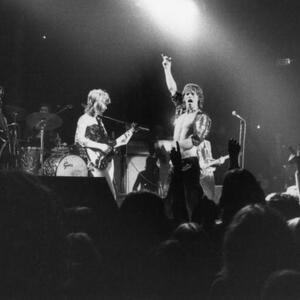