What is Bob Geldof's net worth?

Bob Geldof is an Irish singer-songwriter, author, and activist who has a net worth of $150 million. Bob Geldof first became famous on a worldwide scale as the lead singer of the popular rock band The Boomtown Rats. He then went on to have a popular solo singing career. He also founded several highly successful production companies.

He was born in Dun Laoghaire, County Dublin, Ireland on October 5, 1951, the son of Evelyn and Robert Geldof. When he was just six years old, his mother died at age 41 from a cerebral brain hemorrhage. Geldoff attended Blackrock College where he was bullied for being a bad rugby player and for his middle name, which is Zenon. He worked after college as a slaughterman, a road navvy, and a pea canner, and then was hired as a music journalist in Vancouver Canada for "The Georgia Straight."


Bob Geldof returned to Ireland in 1975 and became the lead singer of the Boomtown Rats, a rock group linked with the punk movement. They had their first No. 1 single in the UK in 1978 with "Rat Trap." They gained international attention with their second UK No. 1 hit, the both successful and controversial "I Don't Like Mondays." Geldof had written the song in the aftermath of Brenda Ann Spencer's attempted massacre at an elementary school in San Diego in 1979. In 1980, the group released the album "Mondo Bongo." Its single "Up All Night" was a giant success in the U.S. and the video played frequently on MTV.

Geldof quickly became famous as a colorful interview subject. During his interviews, he'd attack Irish politicians and the Catholic Church, along with Blackrock College. His interviews caused uproar and made it impossible for The Boomtown Rats to play in Ireland again. Geldof left The Boomtown Rats to launch his solo career and to publish his autobiography, "Is That It?" which was a UK bestseller. His first solo records sold reasonable amounts and spawned the hit singles "This Is the World Calling" and "The Great Song of Indifference." 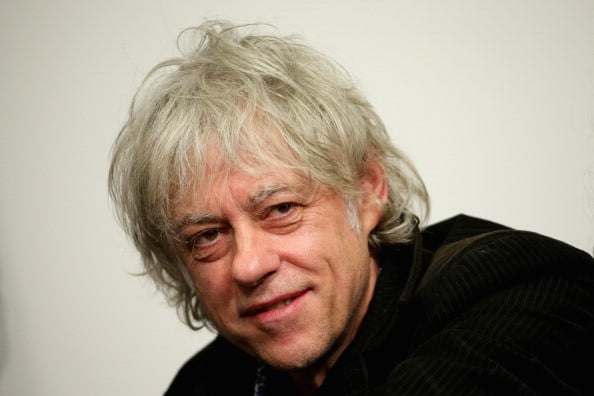 In 1984, Geldof was moved after hearing a report on the starving children of Ethiopia. He quickly organized a supergroup of pop musicians under the name Band Aid to write the song "Do They Know It's Christmas?". The song debuted at #1 and became the biggest selling single in the UK ever, up to that point. It was also a major hit in the U.S. The single eventually sold over three million copies and raised more than $20 million for the people of Ethiopia.

After learning that the majority of the money he raised would actually be used to repay Ethiopia's national debts to Western banks, Geldof set out to organize the Live Aid concert. Live Aid took place on July 13, 1985. The concert took place in both the UK's Wembley Stadium and JFK Stadium in Philadelphia. 72,000 people attended the concert at Wembley and over 100,000 attended in Philadelphia. It was also simulcast around the world. And, thanks to an unprecedented decision by the BBC to clear its schedules for 16 hours of rock music, the event was also broadcast live in the UK on TV and radio. 1.9 billion people tuned in from 150 nations to watch the concerts.

It was one of the most monumental stage shows in history, with Phil Collins flying on the Concorde so that he could play at both Wembley and Philadelphia on the same day. During the broadcast, Geldof shocked viewers into giving cash by mouthing profanities and slamming his fist on the table and ordering them not to go to the pub, but to stay home and watch the show.

Nearly seven hours into the London concert, Geldof gave a famous interview with BBC presenter David Hepworth in which he said: "Fuck the address, let's get the [phone] numbers!" It has passed into folklore that he yelled at the audience, "Give us your fucking money!" Due to his Irish accent, the profanity was stated to be misheard as "fock" and "focking" respectively. After the outburst, giving increased to £300 per second. The harrowing videos of dying, skeletal children, introduced by David Bowie following the end of his set, contributed to the concert's success.  Live Aid would eventually raise more than $300 million for famine relief and earned Bob Geldof a Knighthood from the Queen of England when he was just 34 years old.

Bob Geldof's longtime girlfriend and first wife was rock journalist Paula Yates. They met when she became an obsessed fan of The Boomtown Rats during the band's early days. Before they were married, the couple had their first daughter, Fifi Trixibelle Geldof, born in March of 1983. They married in June 1986 and had two more daughters, Peaches Geldof (b. 1989) and Pixie Geldof, born in September 1990.

In February 1995, Paula left Bob for Michael Hutchence, the lead singer of INXS. She had met him in 1985 when she interviewed him on her show "The Tube." Geldof and Yates divorced in May 1996 and Hutchence committed suicide in November 1997. After his death, Geldof and Yates each gave police statements on the phone calls they had exchanged with Hutchence that morning but did not volunteer their phone records.

Geldof went to court and obtained full custody of his three children and has since become an outspoken advocate of fathers' rights. Yates died from a heroin overdose in 2000 and Geldof became the legal guardian of the child Yates and Hutchence had had together, Tiger Hutchence. He later adopted her in 2007. In 2019, it was announced that her legal name is Heavenly Hiraani Tiger Lily Hutchence Geldof.

In 2014, Geldof's daughter Peaches died at 25 from a heroin overdose. Later that year, he married French actress Jeanne Marine, his partner of 18 years. The couple resides in Battersea, London. 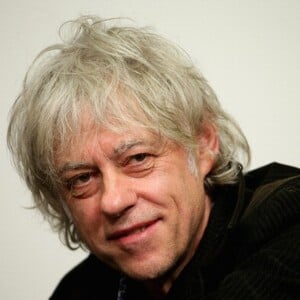