Blackie Lawless net worth: Blackie Lawless is an American musician and songwriter who has a net worth of $9 million dollars. Blackie Lawless was born Steven Edward Duren in Staten Island, New York in September 1956. He is best known as the lead singer and guitar player for the heavy metal band W.A.S.P. Blackie's uncle was Major League Baseball pitcher Ryne Duren. He played with bands like Black Rabbit and Orfax Rainbow. He joined the New York Dolls for a short time. He formed the band Killer Kane in California. He formed the band Sister in 1976. He would light his boots on fire and eat live worms on stage. In 1979 he formed the band Circus Circus and then joined the band London with Nikki Sixx. In 1982 W.A.S.P. was formed. Lawless is the only original member that still remains with the band. They have released 14 studio albums and sold over 12 million copies. In 2012 the band toured to celebrate its 30th anniversary. Lawless was raised a Baptist but left and became interested in the occult. He later stated that he had returned to his Christian faith. He made uncredited appearances in Can't Stop the Music and This Is Spinal Tap. 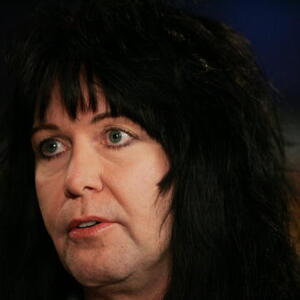