Billy Gibbons Net Worth: Billy Gibbons is an American musician, producer and actor who has a net worth of $60 million. Billy Gibbons is best known as the guitarist and lead vocalist of the rock band ZZ Top. Before this, he was in the psychedelic blues rock band the Moving Sidewalks. Beyond his music, Gibbons has acted on television shows, including the crime procedural series "Bones."

Early Life and Career Beginnings: Billy Gibbons was born in 1949 in Houston, Texas to parents Frederick and Lorraine. Frederick was an entertainer, concert pianist, and orchestra conductor who worked with his second cousin, art director Cedric Gibbons, at MGM Studios. Gibbons' passion for music was sparked at the age of five, when his mother took him and his sister to see Elvis Presley. At age seven, his father brought him to a BB King recording session. Later, his father sent him to New York City to study with musician Tito Puente. Gibbons received his first electric guitar when he was 13; it was a sunburst Gibson Melody Maker, accompanied by a Fender Champ amplifier.

Gibbons attended Warner Brothers' art school in Hollywood, California, where he began playing for many local bands. Inspired by his friend and fellow musician Roky Erickson, and Erickson's band the 13th Floor Elevators, Gibbons formed his own band, the Moving Sidewalks, when he was 18. The Texas psychedelic group recorded a number of singles, such as "99th Floor," as well as one full-length album, called "Flash." The Moving Sidewalks also opened four dates for the Jimi Hendrix Experience during Hendrix's first American headlining tour.

ZZ Top: Following the demise of the Moving Sidewalks in 1969, Gibbons formed the blues rock band ZZ Top. The group includes Gibbons as guitarist and vocalist, Dusty Hill as bassist and vocalist, and Frank Beard on drums. Within a year, the band signed with London Records to release "ZZ Top's First Album." Subsequent releases, including the top-ten album "Tres Hombres" and the singles "La Grange" and "Tush," experienced significant radio airplay. By the mid-70s, largely due to their performances during the Worldwide Texas Tour, ZZ Top became renowned for its live act.

After a two-year break, ZZ Top took a new musical direction, experimenting with instruments such as saxophones, synthesizers, and clavinets. The band released the albums "Degüello" and "El Loco" during this time. A more mainstream sound was evident on the albums "Eliminator" and "Afterburner," which brought together the influences of punk and new wave. In the mid-80s, ZZ Top gained additional prominence appearing on the MTV channel with popular music videos for "Sharp Dressed Man," "Legs," and "Gimme All Your Lovin." Success continued with the band's Afterburner tour in 1986, and later with the 1990 release of "Recycler" and that album's accompanying tour. Later releases have included "Antenna," "XXX," "Mescalero," and "La Futura." ZZ Top was inducted into the Rock and Roll Hall of Fame in 2004, and Gibbons was ranked number 32 on Rolling Stone's list of the "100 Greatest Guitarists of All Time."

Other Musical Projects: Beyond ZZ Top, Gibbons has collaborated with a myriad of other artists. In 2005, he wrote, sang, and played guitar on "Willin' For Satisfaction," a song from Vivian Campbell's solo album "Two Sides of If." The same year, he worked with the Queens of the Stone Age on the song "Burn the Witch." On Nickelback's album "All the Right Reasons," Gibbons made contributions to three songs: "Follow You Home," "Rockstar," and "Fight for All the Wrong Reasons." Gibbons also performed with Hank Williams III on the song "Trashville," collaborated with Les Paul for the track "Bad Case of Loving You," and lent his vocals to Kid Rock's "Hillbilly Stomp." Among the may other artists Gibbons has collaborated with are Sammy Hagar, Ronnie Dunn, Gov't Mule, Jeff Beck, Everlast, and Social Distortion.

In 2015, Gibbons announced a solo project called Billy Gibbons and the BFG's, which features Mike Flanigin, GG Maartine, Greg Morrow, and Joe Hardy. Together, they released the album "Perfectamundo" in 2015. This was followed by the albums "The Big Bad Blues" and "Hardware."

Television Career: On television, Gibbons had a recurring role on the Fox crime procedural series "Bones." Appearing in seven episodes across nine years, he played the father of Michaela Conlin's character, Angela, in a role that was a fictionalized version of himself. In one episode, while trying to calm his crying grandson Michael, Gibbons' character decides to play blues and rock music, including ZZ Top's "Hi Fi Mama." Elsewhere on television, Gibbons voiced characters on the adult animated series "Metalocalypse" and "King of the Hill."

BFG Brand: In 2011, Gibbons partnered with the Texas-based company Mojo Products to launch a line of sauces under the brand BFG. Gibbons later appeared in a series of television commercials for the Texas supermarket chain Fiesta Mart, which featured the sauces.

Personal Life and Automobile Collection: An avid car collector and custom car enthusiast, Gibbons has an extensive motor collection. Among his treasures are a 1948 Cadillac Series 62, a 1950 Ford Business Coupe, and a 1958 Ford Thunderbird. One of his earliest custom cars, a 1933 Ford Coupe, can be seen in three of ZZ Top's music videos. In 2011, Gibbons published the book "Billy F Gibbons: Rock + Roll Gearhead," about his love of both automobiles and guitars.

In 2005, Gibbons wed his longtime girlfriend Gilligan Stillwater. Gibbons owns homes in both Houston and Los Angeles; in the latter city, he has a 1926 Spanish Mission mansion just north of the Sunset Strip. 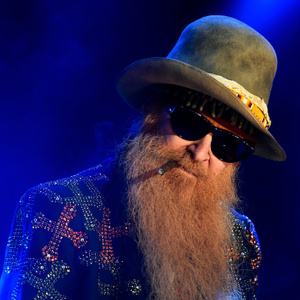