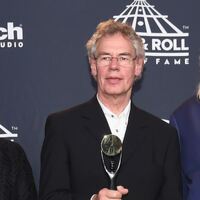 Bill Bruford net worth: Bill Bruford is an English drummer, songwriter, producer, and record label owner who has a net worth of $10 million. Bill Bruford was born in Sevenoaks, Kent, England in May 1949. He is known for being the original drummer for the rock band Yes and he has also played in the band King Crimson and toured with other bands including Genesis before forming his own band Bruford. He retired from performing publicly in 2009 and authored his autobiography. Bruford owns the record labels Summerfold and Winterfold Records. He earned his PhD in Music from the University of Sydney in 2016 and in 2017 he was inducted into the Rock and Roll Hall of Fame as part of the band Yes. He released his only solo album Feels Good to Me in 1978 and was featured on several albums by Yes and King Crimson as well as the bands U.K., Earthworks, and more.