Bev Bevan net worth: Bev Bevan is an English rock musician who has a net worth of $10 million. Bev Bevan was born in Sparkhill, Birmingham, England in November 1944. He was the original drummer of the bands The Move and Electric Light Orchestra. When ELO ended he formed the band ELO Part II and Bevan was also the touring drummer for Black Sabbath from 1983 to 1984.

Bevan played with The Move from 1965 to 1972 and then again from 2004 to 2014. The band released their debut studio album Move in 1968 and it reached #15 on the UK charts. They released three more albums and had a #1 hit in the UK with the single "Blackberry Way". Bevan played for ELO from 1970 to 1986. The band released their debut self-titled debut album in 1971. Their albums Discovery in 1979 and Time in 1981 both reached #1 in the UK. ELO had #1 singles with the songs "Living Thing", "Turn to Stone", "Shine a Little Love", and "Xanadu" (featuring Olivia Newton-John). ELO Part II released two albums and sold the rights to ELO back to Jeff Lynne before changing their name to The Orchestra. Bevan authored the book The Electric Light Orchestra Story in 1980. 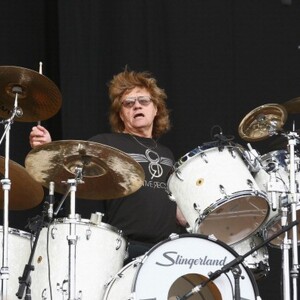