Bernard Edwards net worth: Bernard Edwards was an American bass player, singer, songwriter, and record producer who had a net worth of $20 million at the time of his death (that includes the value of his catalogue at the time and future royalty streams, his music catalogue would eventually become much more valuable).

Bernard Edwards was born in Greenville, North Carolina in October 1952 and passed away in April 1986. He was known for his work in disco music but also played R&B, funk, and soul. Edwards often worked with guitarist Nile Rodgers and the two co-founded the band Chic together. Bernard Edwards released his only solo album Glad to Be Here in 1983. Chic released their self-titled debut studio album in 1977. Their album C'est Chic was released in 1978 and reached #1 on the US R&B chart, #2 in the UK, and #4 on the Billboard 200 chart. Their album Risqué was released in 1979 and reached #2 on the US R&B chart and #5 on the Billboard 200. Edwards also played on the Chic albums Real People in 1982, Tongue in Chic in 1982, and Believer in 1983. Bernard Edwards passed away on April 18, 1996 at 43 years old from pneumonia.

Bernard Edwards' song catalogue consists of 290 songs that have been sampled by hundreds of artists including superstars Justin Timberlake, Sugarhill Gang, LL Cool J and the Beastie Boys. In November 2018, Bernard's estate sold a 37% stake in his catalogue to Hipgnosis for an undisclosed sum. Bernard's song rights produce millions of dollars per year in royalties to this day. 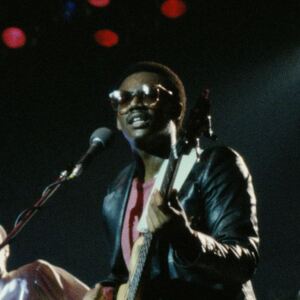