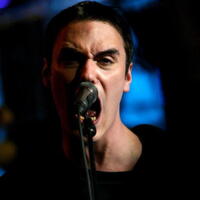 Benjamin Burnley net worth: Benjamin Burnley is an American musician who has a net worth of $4 million dollars. Benjamin Burnley IV was born in Atlantic City, New Jersey in March 1978. He is best known for being the lead vocalist and guitarist for the band Breaking Benjamin. He dropped out of high school and taught himself to play guitar. He earned money by playing cover songs in coffee houses. He got the band name Breaking Benjamin after he broke a microphone while performing. The band started in 1998. The other members of the band have changed multiple times and Burnley is the only constant member. Breaking Benjamin's debut album was Saturate in 2002. Their 2004 album We Are Not Alone hit #20 on the Billboard 200 and was certified Platinum in the U.S. The band's 2006 album Phobia was also Platinum and made it to #2 on the Billboard 200 and #1 on the U.S. Rock charts. Their latest album, 2009's Dear Agony, was certified Gold and hit #4 on the Billboard 200. Their single "Until the End" was certified Gold, and other popular singles include "So Cold", "Sooner or Later", "The Diary of Jane", "Breath", and "I Will Not Bow". The band took a hiatus in 2010 due to Burnley's illnesses and health problems. As of April 2013 Burnley remained the only member of the band, but has plans to continue.