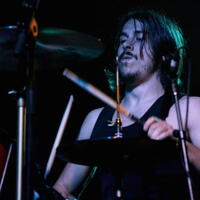 Ben Gillies net worth and salary: Ben Gillies is an Australian musician who has a net worth of $30 million dollars. Ben Gillies was born in Newcastle, New South Wales, Australia, and began his professional drumming career as a member of the band, The Marching Koalas, when he was in elementary school. From there, he formed his own grunge band, called Innocent Criminals. Innocent Criminals began to gain a following and by 1994, when the members of the band were all in their late teens, the group had risen to prominence. They changed their name to Silverchair and released their first EP. Over the course of the next nineteen years, Silverchair released five #1 albums, and multiple hit singles. Over the course of their career, Silverchair has sold more than 10 million albums worldwide. Silverchair holds the record for most ARIA Music Awards and Nominations with 49 and 21, respectively (nominations, wins). In addition to performing with Silverchair, Ben Gillies also launched his own side project, Tambalane. The group released two albums before disbanding in 2005. He released his first solo album, "Diamond Days", in 2012. Ben married Jakica "Jackie" Ivancevic in 2010. In 2014 Jackie Gillies began appearing on the debut season of The Real Housewives of Melbourne. Jackie is a professional psychic.